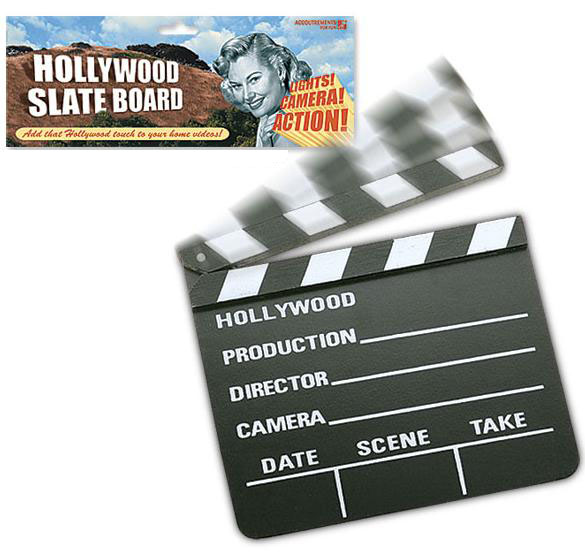 You know those reels that some movies play after the actual movie ends? The one where they show some bloopers and some behind-the-scenes clips when the film was still being shot? I don’t know if you noticed, but they always filmed that clipboard or slate board with the slap-able top (there’s no other way to describe it) where the scene and number of takes are written on before the scene starts. And now you can achieve at least a certain level of authenticity with the Hollywood Slate Board.

I used to think that they were called slap boards (for obvious reasons), but hey, I could be wrong. These Hollywood Slate Boards are fun props to have, especially if you’re into film making, into movies, or just want to have some awesomely cool stuff at your disposal.

Shoot some scenes with the bad guy decked out in the Instant Villain Disguise Kit. You can also even create some short reels using these Hollywood Inspired USB Gadgets.

Add that Hollywood touch to your home and to your home movies.This 7-inches tall x 8-inches wide black and white wooden board has spaces to fill in the Production, Director, Camera, Date, Scene and Take. Quiet on the set! Action!

The Hollywood Slate Board is available from Entertainment Earth for $9.99.

“Hollywood Web Gear” is the common name for two new USB gadgets released by I Want To On Those – one webcam that looks like a Hollywood video camera, and a omputer light styled as a Hollywood spotlight.

Ever feel like enjoying a warm fire but not really into the rustic charm (or handling the required maintenance) of a fireplace? The Slate Tabletop Fireplace brings the fireplace into the 21st century, allowing you to enjoy the fire, the style, and the convenience of […]

GeekAlerts has shown some pretty cool coasters in the past like: The Nightmare before Christmas Wooden Coaster Set, Stargate Coasters and Rubik’s Cube Coasters.  Now with the Slate Coasters you can keep your modern and sophisticated style intact while you protect that expensive furniture and […]

To protect your furniture, you want a good set of coasters, but what if you could also use your coasters to write messages for your guests in chalk? That’s what the Chalkboard Slate Coasters are all about. You could even just write your guests names […]

At your next party, why not serve up some cheese on something different and surprise your guests? This TF Slate Cheeseboard and Chalk Set will add some whimsy to your snacks and give you something to talk about. The set includes soapstone chalk and the […]

We live in a culture that’s all about instant gratification lately. I mean, if you live in some tropical country, you can just whip up a batch of Instant Snow. If you’re in need for some instant loving, then you can just get one of […]

So… you like to slap butts, but it’s not like you can walk around and give in to that urge whenever you feel like it, unless of course you don’t mind spending a little time behind bars. The Slap It Light lets you enjoy your […]

The real reason for the epic battle is revealed with the Batman v Superman Slap T-Shirt. It started innocently enough. Batman said something about tough guy Superman being a wuss when it comes to green rocks. Superman said ‘Yo mamma.’ And that was it. The […]