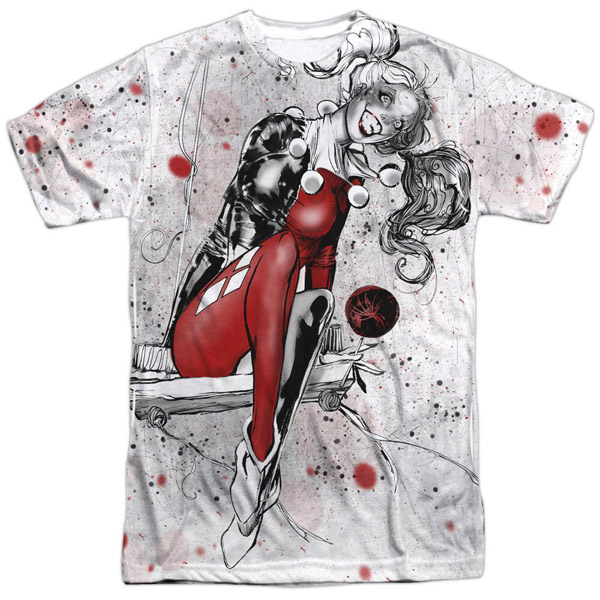 The Joker’s sometimes-girlfriend shows how sane she is on the Harley Quinn Sketch T-Shirt. Judging from the look on face, I don’t think she should count on leaving Arkham Asylum any time soon.

Everybody loves a jester because they always bring the funny but this psycho honey also brings a little madness to the party. Harley Quinn is usually depicted as cute or sexy but this image of the chaos queen gives a peek at just how dangerous Harley could be.

Or maybe she’s just happy. Yeah, that’s it. She’s happy because she just found out she might get released early if she takes part in a little something everyone is calling the Suicide Squad.

I loved fiddling with the Etch-A-Sketch when I was younger. Twist here, turn the knob there, and voila! I’d have a fuzzy and slightly crooked carrot or apple to show to my mother. If the thought of the toy brings warm memories back, then you […]

The T-sketch t-shirt allows you to display a personalized message in a fun and cool way – whatever you write or draw on the chest display will be converted into an illuminated message or design. Anything that’s drawn on the wipe-clean panel activates a glowing […]

The Queen of Chaos is ready to step up to the plate on the Harley Quinn Batter Up T-Shirt, and she’s not looking to play baseball. Dressed in the outfit she wears in the Arkham Knight video game, Harley is ready to watch a few […]

Everyone’s favorite queen of chaos is ready to sling some ink on the Harley Quinn Arkham Tattoos T-Shirt. Inspired by Margot Robbie’s Harley Quinn in Suicide Squad, artist Emilie_B created a detailed look at Harley getting busy with her tattoo gun. A close look reveals […]