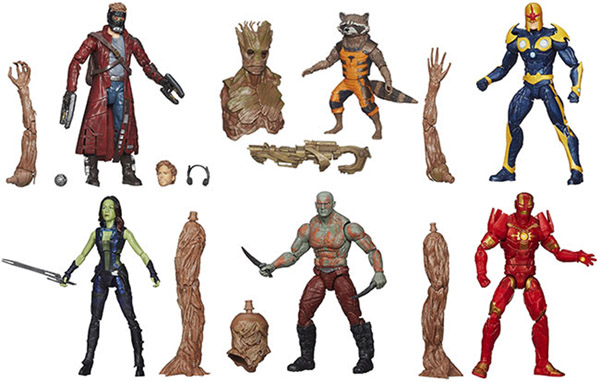 Each character includes pieces to assemble the final member of the team, the tree-like Groot. The character list is subject to change but hopefully you’ll be able to get at least one of each character. Personally, I’d prefer two Nova characters instead of a double-dose of Star Lord. After all, there’s only one Peter Quill but many members of Nova Corp.

The Guardians of the Galaxy Marvel Legends Action Figures Wave 1 will be available July 2014 but they can be pre-ordered now for $159.99 at Entertainment Earth.

The Guardians of the Galaxy Vol. 2 Marvel Legends Star-Lord and Ego Action Figures 2-Pack give you two great figures in one great pack. Ego and Star-Lord share many of the same qualities as father and son. But when it comes to defending the galaxy, […]

You can’d do a proper dance-off or save the galaxy unless you’re wearing the Guardians of the Galaxy Vol 2 Star-Lord Jacket. Made from faux leather and cotton duck fabrics topped with three types of rubberized print, and created using the original patterns teamed with […]