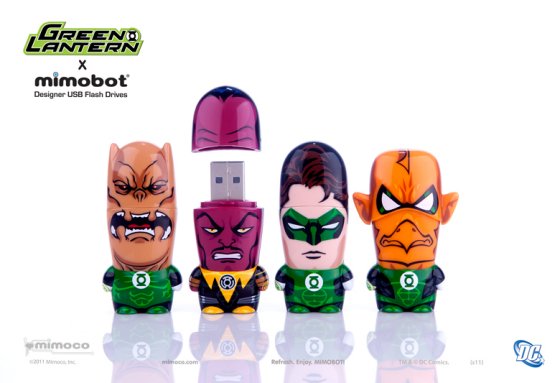 We aren’t all Star Wars, Star Trek or Batman fans. Some of us like different heroes. One of the coolest “other” heroes out there is Green Lantern, which is why the movie is coming to theaters on June 17th. That’s also why Mimobot has decided to unleash these Green Lantern Mimobot drives. They go well with the mini lunch box keychain we showed you last week.

This series of flash drives consists of all of your favorites: Hal Jordan, Tomar-Re, Kilowog and Sinestro. These are the first four, but I doubt they will stop there. We will likely see more characters introduced very soon. They have a fantastic look as usual. These flash drives come in a capacity range of 2GB to 16GB and come pre-loaded with MimoDesk character content for each character, like wallpapers, avatars, screen-savers, and other cool extras.

These Flash Drives are available right now from Mimico and from $22 for the 4GB up to $57 for the 16GB version. They are also available at Amazon.com.

Optimus Prime and Megatron are ready to take their 9 million year old battle from Cybertron to your home with the Transformers Mimobot Flash Drives. Armed with up to 64GB of memory, there is more than meets the eye with this Autobot and Decepticon. Each […]