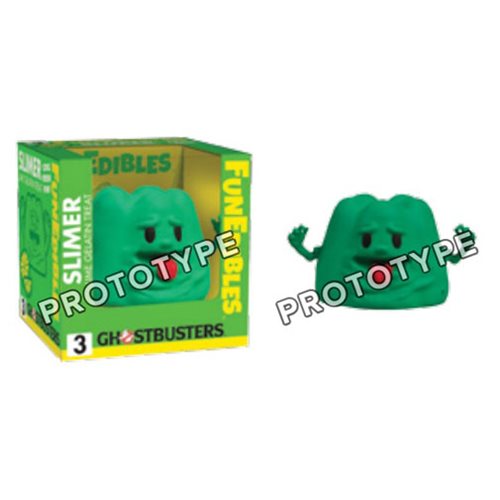 Slimer, the ghost with the insatiable appetite, gets a delicious makeover with the Ghostbusters Slimer Lime Gelatin Funedibles Vinyl Figure.

Standing(??) 4-inches tall, this sweet spin on the supernatural Slimer will have you saying forget the slime and bring on the lime.

The Ghostbusters Slimer Lime Gelatin Funedibles Vinyl Figure will be available September 2016 but it can be pre-ordered now for $14.99 at Entertainment Earth.

It’s finally happened. The Ghostbusters Stay Puft Marshmallow Man Funedibles Vinyl Figure pushes the boundaries so hard that it shoots off completely into left field and circles back to finish where it started. The Funedibles collection has always been a bit quirky, which is probably […]

Busting ghosts has never looked as delicious as it does with the Ghostbusters Pizza Venkman Funedibles Vinyl Figure. It seems like everyone is getting into ghostbusting these days. We have men busting ghosts, women busting ghosts, and now we even have food taking on the […]

Slimer loves food and now it looks like he’s in the mood for a little cheesecake on the Real Ghostbusters ‘Janine & Slimer’ T-Shirt. On the big screen, poor Slimer didn’t stick around long, getting sucked into the containment unit early in the film, even […]

If there’s something strange in your neighborhood and you end up getting slimed before you can call the Ghostbusters, just relax. Have yourself some Ghostbusters Slimer Sours Candy. It will be alright. Slimer likes to, well, slime people. But now he is offering something good. […]

They might not be best pals, but the Ghostbusters Slimed Peter and Slimer Pop! Vinyl Figures bring us two characters that go together like peanut butter and jelly. “He slimed me.” And with those words, Bill Murray’s Peter Venkman and the little green spud affectionately […]

There’s always room for Jello; especially when it is shaped like the TARDIS. This Doctor Who TARDIS Gelatin Mold Set will make exactly that kind of Jello. Each mold holds 1 cup. Make gelatin or cupcakes, even chocolate. Your parties will never be the same […]

The Ghostbusters Slimer Motion Lamp is all about that green ghoul Slimer! It’s filled with slime. Now you can light up your home or office in a haunting way. The Slimer Motion Lamp will add a haunted feel to any room and the morphing body […]

You might not be afraid of no ghosts but you’ll probably be afraid of this Ghostbusters Adult Inflatable Slimer Costume. There will definitely be something strange in your neighborhood when you go walking around in this eye-catching costume… and the strangeness will be you. When […]

You’ve always wanted your own Slimer. Admit it, you think he’s awesome. This Ghostbusters Floating Slimer is awesome. He floats back and forth along a 15′ cord. That’s not all he does. His eyes light up, he glows in the dark and he plays the […]

Slimer has quite the appetite but he appears to reach a whole new level of hungry with the Ghostbusters Slimer Headpiece Mask because it looks like you’re trying to avoid being eaten by the slimy little green blob. Complete with detailed paintjob, wrinkles, and little […]

Who is your favorite character from Ghostbusters? It has to be Slimer. Everyone loves this guy. Now you can put him on your desk with this Ghostbusters Slimer Pop! Vinyl Figure. Slimer comes to life with this fantastic Pop! Vinyl figure. This adorable and stylized […]