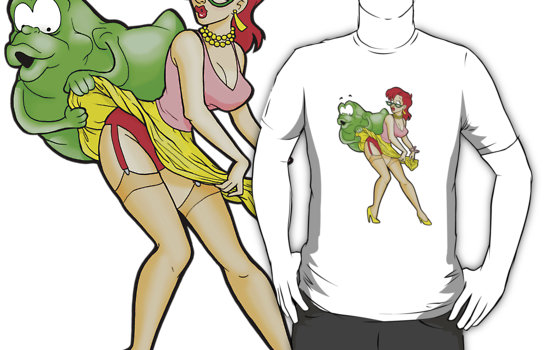 Slimer loves food and now it looks like he’s in the mood for a little cheesecake on the Real Ghostbusters ‘Janine & Slimer’ T-Shirt.

On the big screen, poor Slimer didn’t stick around long, getting sucked into the containment unit early in the film, even though he always seemed more hungry than evil. He did, however, manage to make his way back to the land of the living when all the other spirits were released.

Despite minimal movie time, the little green spud became an instant hit on the animated show, The Real Ghostbusters, with the cartoon eventually being renamed Slimer and the Real Ghostbusters. Not bad for something that got its start by sliming Bill Murray.

With this colorful image based on the animated series, Slimer is caught being a little naughty, while Janine resembles a vintage pin-up model. The artwork was created by BeccaW. 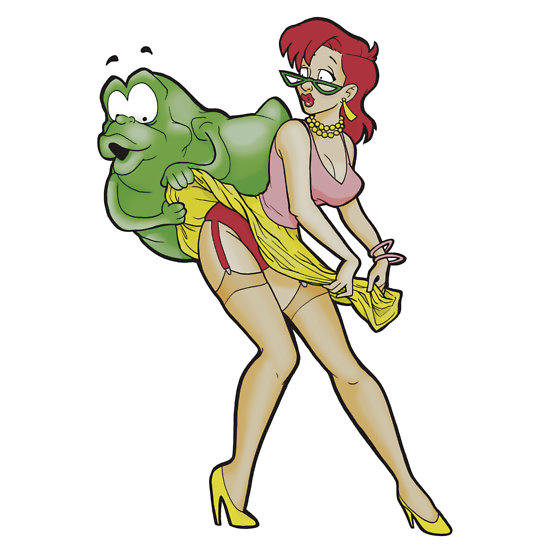 The Real Ghostbusters ‘Janine & Slimer’ T-Shirt is available for $22.40 at RedBubble.com.

They might not be best pals, but the Ghostbusters Slimed Peter and Slimer Pop! Vinyl Figures bring us two characters that go together like peanut butter and jelly. “He slimed me.” And with those words, Bill Murray’s Peter Venkman and the little green spud affectionately […]

You might not be afraid of no ghosts but you’ll probably be afraid of this Ghostbusters Adult Inflatable Slimer Costume. There will definitely be something strange in your neighborhood when you go walking around in this eye-catching costume… and the strangeness will be you. When […]

If there’s something strange in your neighborhood and you end up getting slimed before you can call the Ghostbusters, just relax. Have yourself some Ghostbusters Slimer Sours Candy. It will be alright. Slimer likes to, well, slime people. But now he is offering something good. […]

All Ghostbusters fans love Slimer, but would never want to meet him in person, because things would get messy. It’s much safer just to display this awesome Ghostbusters Light-Up Slimer Statue. Instead of sliming you, this limited edition statue does something much cooler. It lights […]

You’ve always wanted your own Slimer. Admit it, you think he’s awesome. This Ghostbusters Floating Slimer is awesome. He floats back and forth along a 15′ cord. That’s not all he does. His eyes light up, he glows in the dark and he plays the […]

Slimer, the ghost with the insatiable appetite, gets a delicious makeover with the Ghostbusters Slimer Lime Gelatin Funedibles Vinyl Figure. In the Ghostbusters movie, Slimer really didn’t look very appealing. Sort of like a giant green booger. The animated version of the character wasn’t much […]

If there’s something strange in your neighborhood, who ya gonna call? Ghostbusters. Just don’t let them capture this Ghostbusters Slimer Piggy Bank, or else you won’t have anywhere to put your money. This awesome bank is a great way to save up for more Ghostbusters […]

Slimer has quite the appetite but he appears to reach a whole new level of hungry with the Ghostbusters Slimer Headpiece Mask because it looks like you’re trying to avoid being eaten by the slimy little green blob. Complete with detailed paintjob, wrinkles, and little […]

The Ghostbusters Slimer Motion Lamp is all about that green ghoul Slimer! It’s filled with slime. Now you can light up your home or office in a haunting way. The Slimer Motion Lamp will add a haunted feel to any room and the morphing body […]