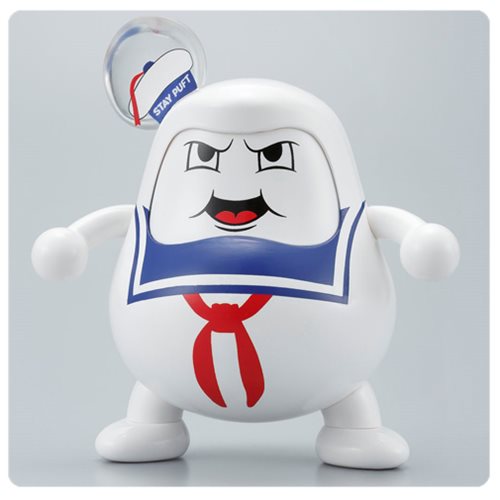 This mini-figure celebrates the 2016 Ghostusters movie. Daruma Club is a format figure line of Japanese Daruma dolls that have sprouted arms and legs! They stand around 3 1/2-inches tall. Think of them as a re-imagination of Japan’s traditional lucky dolls. This is an unusual Stay Puft collectible that will display nicely in your collection.

Only $14.99 from Entertainment Earth. Pre-order it now for October.

“I tried to think of the most harmless thing. Something that could never destroy us. Something I loved from my childhood. The Stay Puft Marshmallow Man! He was on all the packages we used to buy when I was a kid. We used to roast […]

Have the Stay-Puft Marshmallow Man with you wherever you go with this Ghostbusters Stay Puft Plush Clip-On w/ Sound. This cute mascot is 5 inches tall and is a perfect memento of the Ghostbusters movie. You can choose from happy or angry Stay Puft. Just […]

If you’re a fan of the 80s, you’ll want to consider dressing up for Halloween this year in this Ghostbusters Inflatable Stay Puft Marshmallow Man Costume. Most large costumes are hot, heavy, and expensive, but none of those are problems here because of the innovative […]

It’s finally happened. The Ghostbusters Stay Puft Marshmallow Man Funedibles Vinyl Figure pushes the boundaries so hard that it shoots off completely into left field and circles back to finish where it started. The Funedibles collection has always been a bit quirky, which is probably […]

This Ghostbusters Burnt Stay Puft Marshmallow Man Swing Series Bobble Head is a cute mini collectible version of Stay Puft after he’s been shot with the proton packs in Ghostbusters. He looks pretty angry about it too. This cute figure measures 3 3/4-inches tall and […]