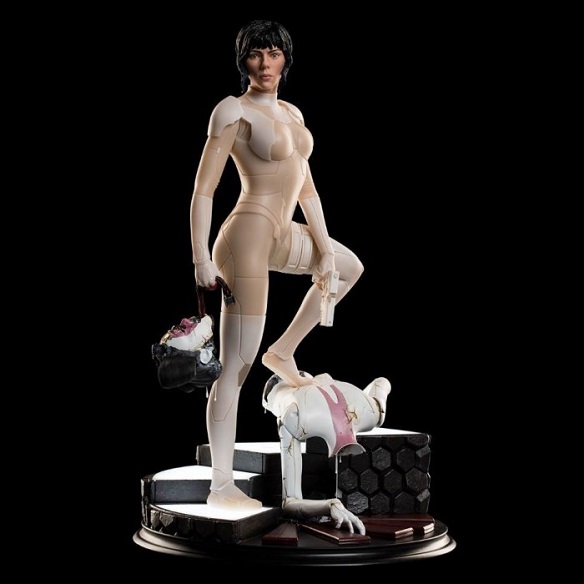 Motoko Kusanagi gets a new look with the Ghost in the Shell The Major 1:4 Scale Statue.

Based on Scarlett Johansson’s portrayal of the character in the upcoming 2017 film and crafted by the same Weta Workshop artists that worked on the film, this polystone statue features Major Motoko Kusanagi standing on a light-up base, holding the decapitated head of her latest enemy, its body laying at her feet.

The statue is limited to just 500 pieces.

The Ghost in the Shell The Major 1:4 Scale Statue will be available April 2017 but it can be pre-ordered now for $448.99 at Entertainment Earth.

This Ghost in the Shell Geisha 1:4 Scale Statue represents the beautiful geisha from the 2017 sci-fi film Ghost in the Shell. It was made by the same Weta Workshop artists that worked on the film. It is a limited edition of only 500 pieces […]

Nothing tastes better than lunch in half-shell, so pack your lunch in the TMNT Shell Lunch Bag to maximize your turtle power. It doesn’t matter whether you favor Leonardo, Michelangelo, Raphael or Donatello; this lunch bag represents them all. Pack pizza every day if you […]

Cats are born thinking that the world is their oyster and they’re the exotic pearls inside. Many owners buy into their theory and would probably love for their beloved felines to take sweet cat naps in the Cat Shell Pet Bed. Another fascinating thing about cats […]

We’ve shown you Shotgun Shell Styled Party Lights before; but since it’s December 2012 and everyone has Christmas and apocalypse survival on their minds, we thought it was okay to show you another fun set. The Real Shotgun Shell Christmas Lights are a neat way […]

I feel bad sometimes for those ghosts on Pac-Man. You know, the ones with the funny names (Blinky, Inky, Pinky, and Clyde), because while they’re almost as integral to the game as Pac-Man is, there are rarely any merchandise that have been made in their […]

Are you looking for a cool little lamp for your computer desk or workstation?  If so, the USB Light-Sensitive Ghost Lamp may be perfect for you.  With it’s rear mounted light sensor, these little ghostly lamps know when to light up and when to shut […]

The keyrings that are being posted here at GeekAlerts usually comes with a more or less useful feature, like a photo frame or a flashlight.