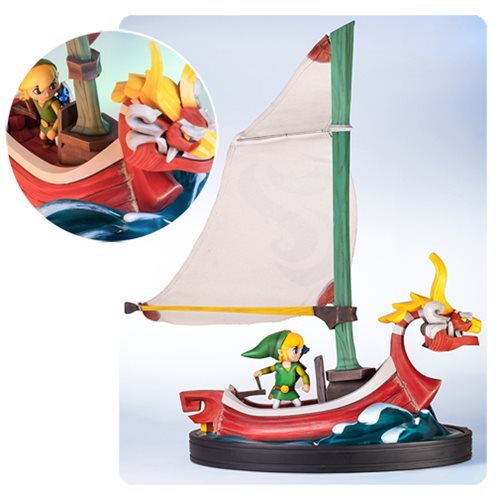 This is an iconic image taken almost directly from the game. This statue stands 25-inches tall from the tip of the mast to the base, making it one of the largest pieces in the Zelda lines from First 4 Figures. This is going to blow people away when they see it in your home. Each has a hand numbered base and an authenticity card.

Only $449.99 from Entertainment Earth. Pre-order it now for June.

This The Legend of Zelda: Wind Waker 550pc Puzzle features a stained glass design of Link and Zelda that fans are going to love. Luckily for you, it does not require finding an item in a temple to complete. It makes a great gift for […]

Zelda games are always fun. You get to run around saving Hyrule and Princess Zelda, but when the game is over, then what? You can cuddle up with a soft verion of Link, that’s what. This Legend of Zelda Wind Waker Link 6-Inch Plush will […]

The Legend of Zelda: The Wind Waker 550-Piece Puzzle

Fans of the Zelda franchise of games are going to enjoy The Legend of Zelda: The Wind Waker 550-Piece Puzzle. This puzzle brings Hyrule to life in puzzle form. If you like a good challenge this puzzle is the right one for you. It has […]