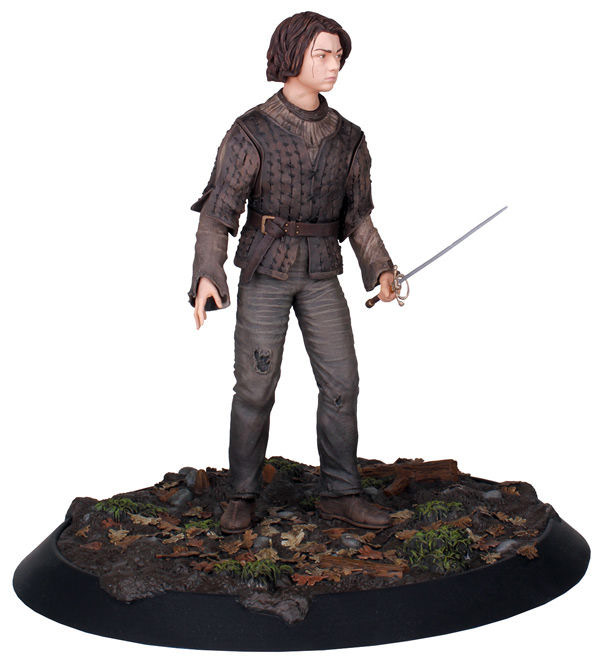 Tough women come in all shapes and sizes, and the Game of Thrones Arya Stark 11-Inch Statue depicts one of the toughest characters around in the fictional world created by George R.R. Martin, although it’s very easy to underestimate the seemingly helpless child at first.

Poor Arya has what must be one of the lousiest childhoods that anyone has ever had to endure, but she’s rising to the challenge, as seen in the no-nonsense expression of the character’s face.

The 11-inch-tall statue is one of 1,250 pieces of a limited-edition set that has been approved by both HBO and Maisie Williams, the young actress that portrays Arya on the series.

Arya Stark is becoming quite the little warrior and only a fool would underestimate her, but her sword training began with one simple lesson that’s captured in the Game of Thrones Stick ‘Em With The Pointy End Arya Stark Poster. Arya’s “dance” lessons with Syrio […]

Game of Thrones Arya and The Hound T-Shirt

As Arya and the Hound travel through the wild terrain of Westeros, I’m sure many people are reminded of Calvin and Hobbes. Okay, maybe not but the Game of Thrones Arya and The Hound T-Shirt definitely brings back memories of that lively comic duo, although […]

This Valar Morghulis with Arya Poster looks pretty stunning, featuring our favorite Stark girl looking intense and ready for action. She is probably reciting her list of names and awaiting her revenge on the owners of those names. It features the phrase “Valar morghulis”(All Men […]

This Game of Thrones Stark Shield Limited Edition Prop Replica is nicely detailed and exactly like the shields that House Stark infantry uses with Direwolf Sigil right in the center. This limited edition collectible will look amazing displayed in your home. And you will never […]

This Game of Thrones Stark Emblem Mug will let you proudly display your loyalty to House Stark as you drink your favorite beverage. Winter is Coming, so maybe fill it with something warm. This officially-licensed Game of Thrones merchandise is a must for fans of […]