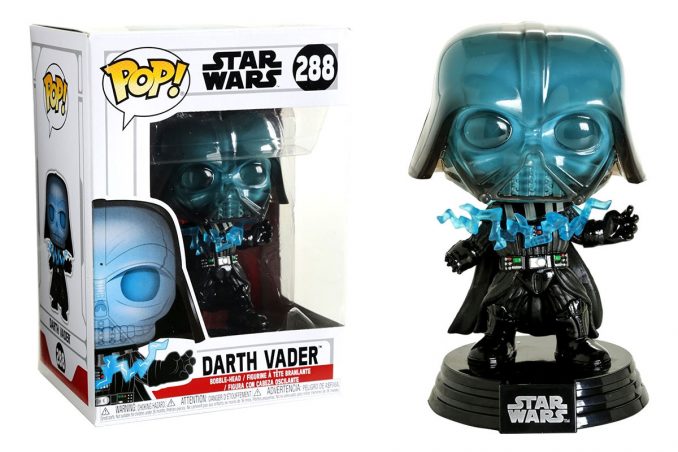 Who can forget this iconic scene from Return of the Jedi? The moment Darth Vader becomes the victim of Emperor Palpatine’s Force lightning is forever immortalized as a Funko Pop! bobble-head.

This Funko Pop! Star Wars Emperor Palpatine Bobble-Head features Force lightning coming out of his fingertips. It is a great vinyl figure for those whose most prominent memories of the the Emperor are from the end of Return of the Jedi where he uses Force […]

The Dark Lord of the Sith gets lit up on the Vader Glow-in-the-Dark Electrocuted T-Shirt during an electrifying encounter with his master. In Return of the Jedi, Anakin Skywalker finally clawed his way out of darkness to save his son. It doesn’t help those kids […]

Standing 4-inches tall and based on Daisy Ridley’s portrayal of the character in Star Wars: The Last Jedi, the Star Wars The Last Jedi Rey Funko Pop Bobble Head stands defiantly in her stylish new duds, complete with arms wraps because living on a desert […]