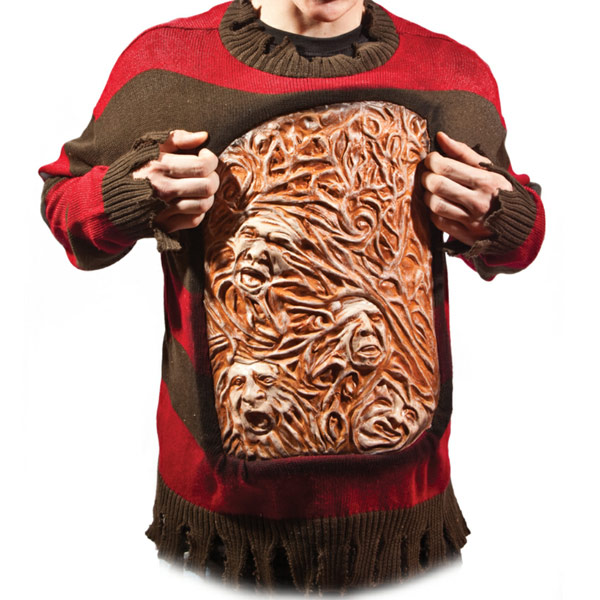 Whether you want to have a mind-blowing outfit for Halloween or just want to freak people out when you go to the store, the Nightmare on Elm Street Freddy Krueger Animated Chest of Souls Sweater is guaranteed to be an attention-getter.

One of the most awesome scenes in A Nightmare on Elm Street 4: The Dream Master was when Freddy ripped open his sweater to reveal all the trapped souls fighting to escape, and now you can bring that moment to life.

The sweater has a secured battery pack that provides movement to the souls on the chest, and even features realistic audio from the movie, adding a special little flair for those weird friends who aren’t already freaked out by the fact that your clothes are moving.

The Nightmare on Elm Street Freddy Krueger Animated Chest of Souls Sweater will be available September 2013 (just in time for Halloween) but it can be pre-ordered now for $99.99 at Entertainment Earth.

Don’t fall asleep. You might miss out on this Nightmare on Elm Street Freddy Krueger 18-Inch Bust. This movie-quality bust of Robert Englund’s Freddy Krueger is a limited edition. It includes a numbered plaque and certificate of authenticity. This bust stands 18-inches tall and looks […]