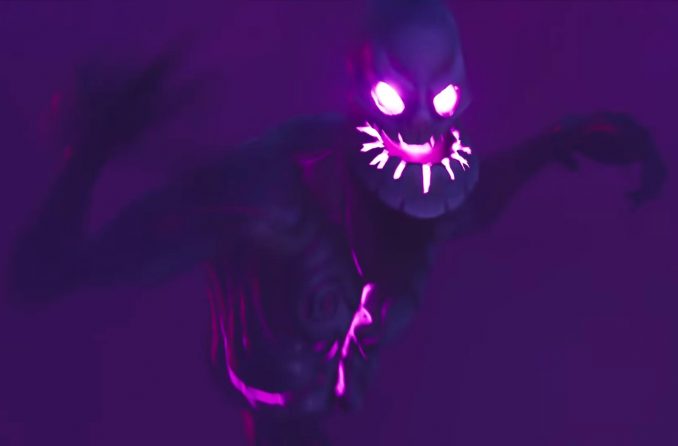 Today’s v6.20 patch delivers the Fortnite Fortnitemares 2018 Update, which includes creepy creatures and new weapons to use against them. There’s plenty of wild new graphics, a new pirate minigame, and much more to make the game extra exciting for the Halloween season.

Fortnitemares 2018 is here, featuring all manner of haunting happenings across Fortnite. Skulk in the shadows to scare your way to a Victory Royale or brave hair-raising husks to complete the weekly new missions. Darkness has risen.

Come one and all, are you ready for some scares? Then join us this season during Fortnitemares!

New weapons and Heroes are soon to arrive. Will they be enough to help you survive?

Approaching now is a fun new sound, and all new surprises await in Playground.

See what haunting horrors await you during Fortnitemares. Wield new weapons to fight back against creepy creatures, like the Six Shooter and Fiend Hunter Crossbow. Jump in and start playing!

Notable additions to Battle Royale include the Six Shooter and Fiend Hunter Crossbow. While the Six Shooter is a permanent addition, the Fiend Hunter Crossbow is just for the limited time Fortnitemares event. Also for Fortnitemares, the Rocket Launcher has a graphic change to be the Pumpkin Rocket Launcher and Cube fragments spawn Cube monsters (Fiends and Brutes) that you can defest for a small amount of shield and chance for a loot drop.

During Fortnitemares, you’ll face off against Cube Monsters in a whole new way of playing Battle Royale. There are new weapons to fight back against these creepy creatures, like the Six Shooter and Fiend Hunter Crossbow. Take out the Cube Fiends and Fragments to pick up loot, and survive against enemy players.

Make sure you’re lookin’ good while the darkness descends and pick up the new Deadfire Outfit. This new type of reactive outfit features in-match progression, giving you a way to show off your skills in style. The outfit will progress through 2 styles based on the damage you deal enemies (players and AI) and how long you last in a match.  Deadfire also comes with the Shackled Stone Back Bling and you can pick up his matching Dark Shard pickaxe in the store, both of these are reactive cosmetics.

Fortnitemares has its own set of free challenges. Complete each challenge set to unlock a new in-game cosmetic.

These are the first set of challenges:

For Save The World, Fortnitemares Part 1 is now available, allowing you to venture into the creepy lands of Hexsylvania and experience the “Vlad Moon Rising” questline.

The spooky scenery of Hexsylvania has returned…  Explore the world as Fortnitemares descends upon the landscape. Play through multiple sets of story quests and earn new rewards as you fight the fright alongside your friends.

Here’s just a slice of the content coming to Save the World during Fortnitemares:

Creep into the event store to snag some spooooky Llamas over the course of the event, using the event-specific Fortnitemares currency: Candy. You can earn Candy by completing the various questlines released in two parts and spend them towards building out the spine-chilling set.

Escape the darkness… if you can!

If you like Battle Royale games like Fortnite, check out this Islands of Nyne: Battle Royale Gameplay Trailer. It looks like the action is smooth, fast, and furious. What sets it apart from some of the other Battle Royales like PUBG and Fortnite is that […]

At first glance, the Jigger Aluminum Cube looks like some random, aluminum cube with some weird writing on it. But if you look at the engravings closely, you will see that they’re actually units of measuring and that they’re on every face of this durable […]