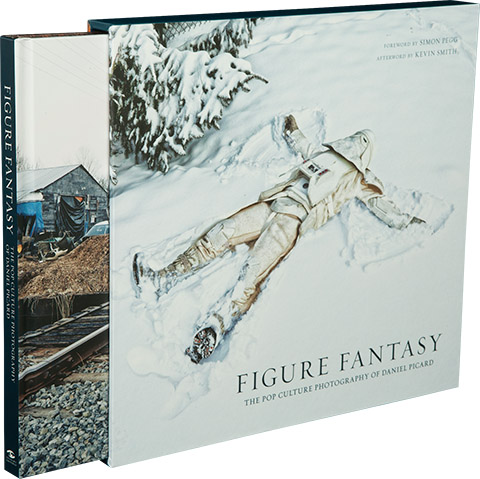 Yes, that’s a Star Wars Snowtrooper making a snow angel on the cover of Figure Fantasy: The Pop Culture Photography of Daniel Picard Collector’s Edition, and that’s just one of the interesting art pieces that can be found in this hardcover book.

Sideshow Collectibles has offered a wide variety of awesomeness over the years. Most people get their hands on the highly-detailed figures and put them in a place of honor to be admired by all those who are deemed worthy.

Photographer Daniel Picard used the figures to create a gallery of fantasy scenarios featuring various recognizable characters from DC Comics, Marvel Comics, Star Wars, Terminator, and many other fictional universes. Where else will you see a Star Wars Battle Droid sitting on a toilet?

The deluxe hardcover limited collector’s edition includes an attractive slipcase, a card of authenticity signed by the photographer, three digitally signed and embossed fine art photo prints, a foreword by Simon Pegg, an afterword by Kevin Smith, and an introduction by Daniel Picard.

Figure Fantasy: The Pop Culture Photography of Daniel Picard Collectors Edition will be available Jun 2015 – Jul 2015 but it can be pre-ordered now for $99.99 at Sideshow Collectibles.

Let the Dark Knight become your fantasy with the Batman Fantasy Figure Gallery 1:6 Scale Statue. Standing approximately 14 1/2-inches tall and based on the work of fantasy illustrator Luis Royo, the Dark Knight crouches over a busted Bat Signal, a Batarang clutched in his […]

Remember when Captain Picard was assimilated into the Borg? The Picard Pizza Shirt shows that he remembers, and he’s not happy about it. Vengeance is best served with an extra topping of pepperoni. Captain Jean Luc Picard pilots the U.S.S Pizza-Flinger on this American Apparel […]

There’s no doubt about it. The DC Comics Fantasy Figure Gallery Katana Statue is one sharp-looking statue. Fantasy illustrator Luis Royo offers up his vision of DC Comics’ Katana, with the girl behind the mask, Tatsu Yamashiro, revealing herself to her adoring fans. Don’t get […]

Get hammered and have a ball with the Harley Quinn Fantasy Figure Collectible Statue, featuring the woman who puts the fatal in femme fatale. Harley continues the Fantasy Figure series that was started with the Catwoman Fantasy Figure Luis Royo Statue, which features a Catwoman […]

This Star Trek TNG Picard Facepalm Mousepad is pretty appropriate for a lot of stuff you find online. So it is the perfect mousepad. It is a polyester mouse pad with rubber bottom that shows Picard giving the universal sign of frustration. We can all […]