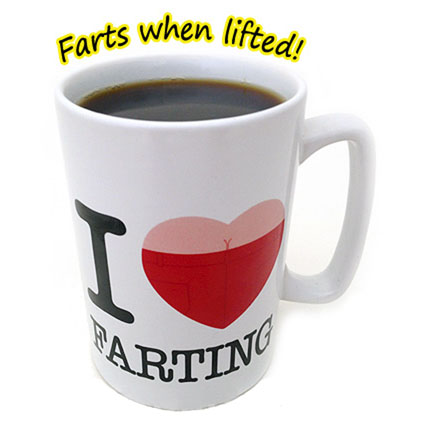 Some people say that a person’s mug says a lot about their personality. And we’re not talking about your face when we say “mug” either. For example, if you use the Putter Cup Golf Mug, then you’re probably a golfer who enjoys spending Saturdays at the country club. If you use the Walking Dead Surrounded Mug, then you’re probably a huge fan of the TV show.

But if you use the Farting Mug, which makes a farting sound whenever you lift it up, then what does that make you? Someone who loves farts, perhaps, or someone who’s into practical jokes. Or it could just mean that you’re someone who doesn’t take yourself very seriously–which isn’t necessarily a bad thing.

The Farting Mug is available from Barob Bob’s for $14.95.

It might be the season to be jolly, but that doesn’t mean you can’t be funny or quirky. You might already have the Zombie Mistletoe – Christmas Ornament and LEGO Christmas Holiday Ornaments hanging up your tree. But what both of these can’t do that the Farting […]

Farts in a Can

I think there are some people who really find fart jokes to be unbearably funny. And I have to admit, I’m one of them. Just crack a simple fart joke and I’ll be doubled over in laughter for minutes on end. However, what I’m not […]

Just like the guy that farts on a plane and thinks no one can smell it because they can’t hear anything, farting in an elevator is just wrong. Sure you can look around and make subtle gestures towards the clueless guy in the corner, but […]

You’ve heard of Putt Putt golf, but chances are you don’t know Butt Putt Golf. Butt Putt Golf Farting Practice Putter combines two of your favorite things. Golfing and farting. If that isn’t enough to entice you I don’t know what is. It’s an honest […]

It’s starting to look a lot like Christmas??? That might not be the first thought that pops into your head when you see Santa’s Farting Butt Travel Pillow in all its cheeky glory but you have to admit it’s one decoration that won’t be owned […]