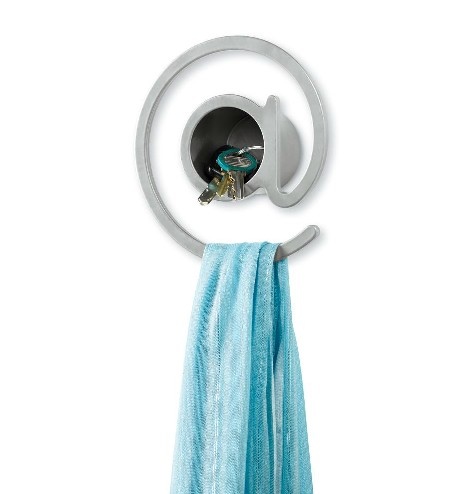 The next time anyone asks you where your stuff’s at, tell them it’s at nowhere else, but at–at the @ Entry Hook, that is. I dare say that the “at symbol,” @, formed by pressing down Shift on your keyboard plus “2” became popular only when emails took over how people communicated with one another.

The @ Entry Hook basically has two general uses: it’s a hook where you can hang your coats or towels on, and it’s also a cubby hole where you can store your keys, gum, Swiss knife, or any other random small thing that may need some temporary storing.

Home is where you hang your “at.” A clever contemporary hook for hanging coats and more that has a storage cubby for your keys. In modern die-cast aluminum.

The @ Entry Hook is available online from Chiasso for $38.

So you’re back at work after a long evening of partying and great food. You just can’t get the taste of roast beef out of your mouth; heck, you even wish you brought home some of those leftovers with you. Well, now you can actually […]

In the mood for some franks and beans? Well, the ones you’ll find inside this tin of Franks & Beans Bubble Gum isn’t exactly like the real thing, although they look like it. Just make sure you don’t accidentally bring along this can with you […]

So I say, “Put your coat where your passion is.” If you’re really into social networking, then the Facebook Like Hanger will do the job for you. If you’ve got a thing with cursing (or with wanting to stop or at least curse less), then […]

I have a confession. I love cocktail wienies in a can, and I’m sure many of you feel the same. Bring on the nitrates, mystery meat, and sodium all packaged in an aluminum can! Sadly, I can’t bring myself to buy a can anymore. Blame […]