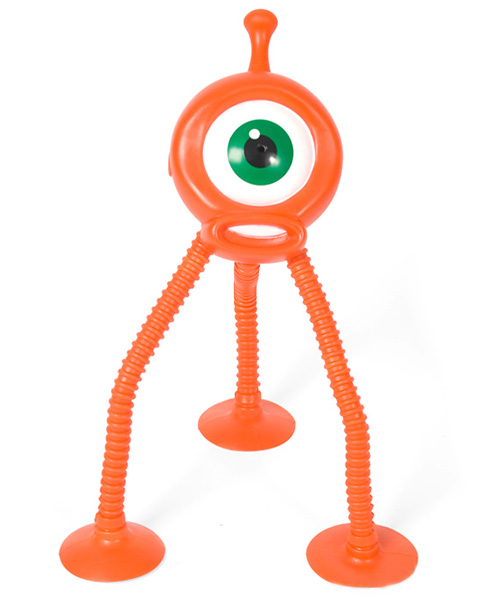 Until we resort to cloning ourselves, we’ll have to settle for robots as the next best thing. Maybe you’ve seen the WowWee Mr. Personality Robot on this site. He’s an extension of your wonderful self; a robotic mini-me you could say. Well here’s Echo Bot, a voice-recording robot that spreads your words of wisdom (in a robotic voice) when motion activated.

If you’re having a hard time getting through to someone, perhaps you ought to turn to Echo Bot to effectively get your point across. When you find yourself having to nag, let Echo Bot be the bad guy instead. Say you’ve got a roommate who won’t stop eating your Cheetos. Catch him/her off guard by placing Echo Bot in close proximity to the goods (allegedly up to 1 meter away). He has suction cup feet that stick onto flat surfaces. Then get creative with your 10-second idle threat or warning. You could try out your best ‘Eric Cartman’ voice saying, “Step away from my cheesy poofs!”

Echo Bot is too funny-looking to even get mad at. Almost cute after a while. But don’t be mistaken. Being caught red-handed with the bot’s big green cycloptic eye and stern words is enough to strike fear into the hearts of your offenders.  Meanwhile, you can be somewhere else doing more productive things than guarding your Cheetos. Or catch the whole scenario you’ve staged unfold and add it on YouTube.

On the other hand you can let Echo Bot represent the diplomatic you. If you haven’t been so nice to your significant other lately, maybe you’d record a kind and loving message sort of like, “Roses are red, violets are blue, you are now welcome to sleep in the bed.” There is really no limit in what you could make Echo Bot say, and so Echo Bot’s novelty won’t ware off too quickly.

Pretty soon robots will be doing everything for us, so why not let them quench our thirst. Until a real drink serving robot gets affordable, this Bot-L Robot Sports Bottle will do nicely. Let him be your own personal robot that hydrates you at your […]

It’s cool to have a pool and it adds a little bit of class to have lights in the pool, but the Illuminated Fish Bots will let you really stand out in the neighborhood. How many other people on your block have swimming, light-up fish […]

The Party Bot Micro is all about partying until his circuits explode. It is a party-ready robot with LED lights that projects colorful patterns. The lights pulsate to your music too. He is a party animal. Party Bot Micro Motorized robot that streams music from […]

R’bot is an electro-mechanical multimedia robot buddy, developed by the Swedish Awerks AB company. You can enjoy listening to MP3 files through its built-in mono speaker or by using stereo headphones supporting Bluetooth (A2DP). The RAM memory capacity is 4 GB and there’s also a […]