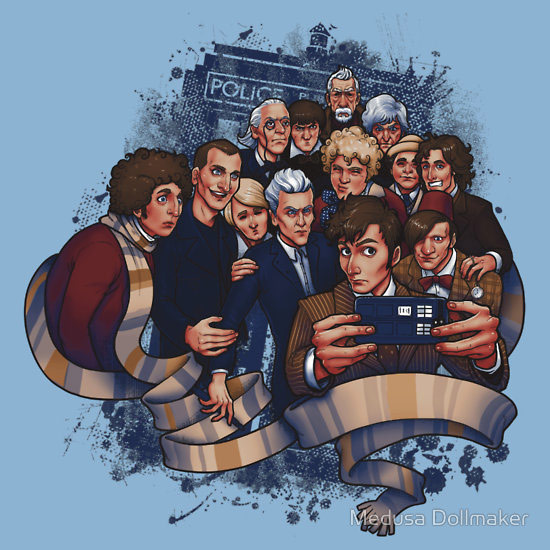 As the Doctor Who Selfie T-Shirt reveals, the Doctor would have the most crowded self-portrait that ever existed if he managed to take a selfie that captured all his regenerations.

The great thing about this shirt is that it literally has all of the Doctor’s regenerations up to this point in time. The often-overlooked War Doctor is here, looking just as grumpy as ever, and Peter Capaldi’s 12th Doctor, the newest incarnation of the Time Lord, is also on the scene. I especially like how Twelve seems to be shoving Nine out of the way. No offense, Nine, but that’s a creepy smile on your face.

Also, isn’t it sort of fitting to have David Tennant’s Tenth Doctor be the one actually holding the camera? I can see him being the camera-hound of the bunch, but that could just be because of the hair. 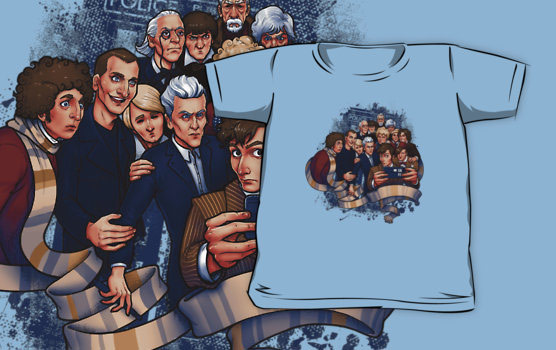 The Doctor Who Selfie T-Shirt by Medusa Dollmaker is available for $20.94 at RedBubble.com.

Fans of New Who will love this Doctor Who Latest Regenerations T-Shirt because it features all the popular Time Lord’s regenerations since the show returned in 2005. Peter Capaldi is the Twelfth Doctor, which of course means eleven twelve others came before him. Can’t forget […]

Not even a criminal like Selina Kyle can resist a self-portrait on the DC Comics Catwoman Selfie T-Shirt, especially when there are cats involved. Illustrator Stephane Roux brings three of the Internet’s most popular things together in an eye-catching portrait of Catwoman taking a selfie […]

Thirteen actors have portrayed thirteen iconic versions of the popular Doctor, and the Doctor Who Regenerations Names T-Shirt lists all thirteen, along with a clever way of showing how each becomes another. The 100% cotton, navy blue tee features the last names of every actor […]

Wreak havoc? Steal jewelry? Save the plants? All that sounds good but the Batman Gotham Sirens Selfie T-Shirt reveals that the Sirens of Gotham City decided selfies come first when it comes to making plans. There’s no reason for these ladies to look as good […]

You want to take a selfie but your hair’s a mess? Luckily, you have the Selfie Brush so you can share your face yet again with your thousands of adoring online fans. It’s a combination that has taken way too long to become reality. Everybody […]

Gwen Poole enters the Funko world with the Marvel Pop! Vinyl Selfie Gwenpool Bobble-Head. She began life as an amalgam of Gwen Stacy and Deadpool for a Deadpool variant cover but now the Unbelievable Gwenpool isn’t connected to either character. Tired of the real world, […]

The Star Wars Lightsaber Selfie Stick looks like the hilt of Darth Vader’s lightsaber. Except this isn’t for battle. It’s for selfies. It features a spring-loaded slot which adjusts from 2 – 3 1/4″ width to hold your phone securely and telescopes. It is 40 […]