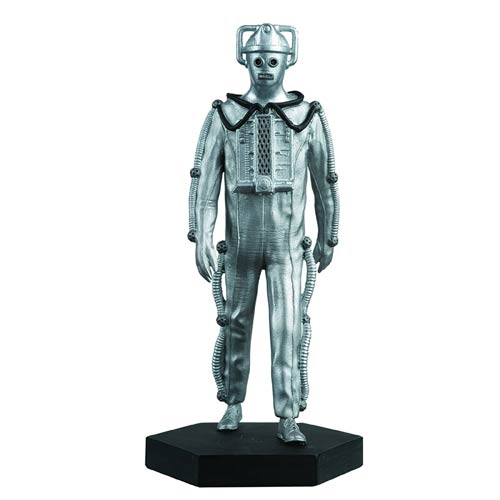 The Cybermen have changed a lot over the years, and that’s very apparent with the Doctor Who Moonbase Cyberman #53 Collector Figure.

In 1967, the Second Doctor and his Companions landed on the moon for a little R & R but soon became involved in an evil scheme being implemented by Cybermen… as the Doctor and his pals usually do when trying to have a little fun. The Moonbase featured the second appearance of the metallic baddies who would become major villains in the Doctor Who universe, making this collector figure a good one to add to your Whovian collection, especially since this is one of those storylines that has lost episodes.

The figure is cast in a specially formulated metallic resin and painted by hand.

Other figures in the collection include the 7th Doctor and the War Doctor.

The Doctor Who Moonbase Cyberman #53 Collector Figure will be available later this month but it can be pre-ordered now for $19.99 at Entertainment Earth.

Delete any resistance to getting your hands on the Doctor Who Mega Cyberman Figure Special #3, because unlike the Cybermen, you are a prisoner of your emotions… and you know you need this. In his journeys through time and space, the Doctor has made many […]

Aw. Look how cute Cybermen look all small and tiny. Surely these guys couldn’t harm anyone. The Doctor Who Character Building Cyberman Collector Set will let you build your very own Cyberman army and unique Cybermen. Build and then unleash the army of cuteness and […]

Upgrade your fashion with the Doctor Who Cyberman Touchdown Shirt, and delete any fears about not being stylish. The Cybermen want everyone to be exactly the same but there’s no reason to blend in when this cool touchdown shirt lets you stand out, with an […]

Fans of Doctor Who can never get enough of the Cybermen. If you love these cyborgs enough to take notes during your Doctor Who episodes, this Doctor Who Cyberman Notebook will help. It has a striking orange cover with a Cyberman on the march to […]

The Doctor Who Cyberman Apron is for the chef who is also a Doctor Who fan. Isn’t it about time we had Cybermen preparing our food? Well, that isn’t going to happen, but we can at least pretend with this apron. This apron features a […]

I know that people like to decorate their couch with extra cushions and for a Doctor Who geek, this Doctor Who Dalek & Cyberman Home Cushion is a must. One side shows off the Daleks, while the other features the Cybermen. That is like getting […]

Doctor Who fans already know that the classic episode “Earthshock” was a good one. Awesome because the Cybermen were in the episode, though sad because Adric died.  Well, you can at least dry your eyes and get this cool Doctor Who Earthshock Cyberman Masterpiece Collection […]

Doctor Who Cyberman Etch A Sketch

If you have ever wanted to get into the head of a Cyberman, this Doctor Who Cyberman Etch A Sketch is the perfect way to do so. It’s the classic toy with a Doctor Who twist. An Etch-A-Sketch that looks like a Cyberman. Draw whatever […]

Time and tide melts the snowman, but the Doctor Who 7th Doctor Collector Figure is no threat at all to snowmen. Daleks and Cybermen, on the other hand, would best be advised to stay away from him. The Seventh Doctor, as portrayed by Sylvester McCoy, […]