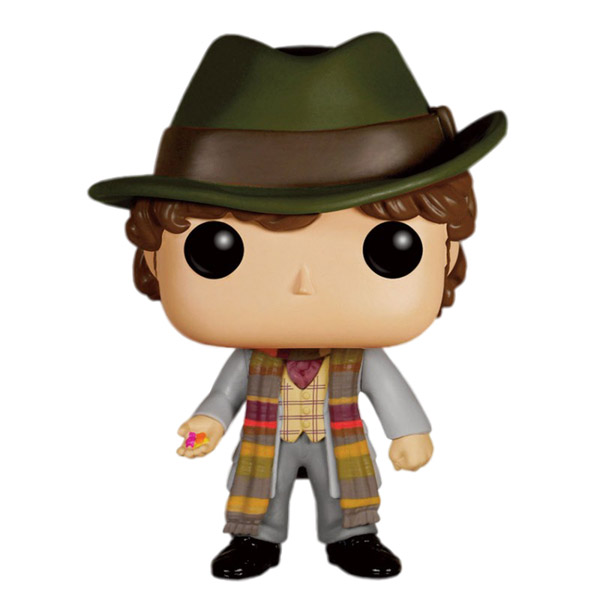 Funko has answered my prayers with the Doctor Who 4th Doctor with Jelly Babies Pop! Vinyl Figure. Now if I could only get that Time Lord to show up in my front yard and take me on an adventure.

When the Doctor Who 4th Doctor Pop! Vinyl Figure showed up, my one regret was that the Jelly-Baby-loving Doctor was holding a sonic screwdriver. That’s fine. It’s an iconic part of Doctor Who. But Jelly Babies are the domain of the Fourth Doctor. Sure, a few other versions have mentioned them in passing but Jelly Babies are to Four what the bow tie was to Eleven.

Thankfully, Funko probably realized this from the very beginning so now we have a 4th Doctor figure holding a handful of Jelly Babies. The little guy has even had a wardrobe change from the other figure, although the iconic floppy hat and long scarf are still present.

The Doctor Who 4th Doctor with Jelly Babies Pop! Vinyl Figure will be available later this month but it can be pre-ordered now for $13.27 at PopCultcha.com.

People who enjoy the fruity flavor of their favorite booze and alcohol concoctions will certainly enjoy the jelly beans in the Jelly Belly Cocktail Mix. The good thing is, people under age 21 can also get their first taste of some alcoholic favorites because not […]

What a person wears says a lot about who he is. What a person eats does too. But what about what someone hangs up on their Christmas Tree? Obviously, bacon lovers will probably have one of these Bacon Ornaments hanging up on their tree. Music […]

If you have kids, then you’ll understand that keeping them satisfied can be difficult. Expensive gifts seem like a great idea, but can fizzle out quickly and leave you short on cash.  Sometimes the way to go is cheaper gifts; they can actually supply your […]

If you love Google and if you love jelly beans, then you will love this wooden Jelly Bean Dispenser. It looks simple and plain when empty, but transforms into a fun and colorful desk accessory once you fill it up with some delectable sweets. It’s […]

For those of you who’ve switched from eating jelly beans the Easter Bunny used to bring to gourmet jelly beans, the Jelly Belly Cocktail Mix is one fruitastic treat not to miss. But if you’re trying to cut back on your jelly bean consumption, these Harry Potter Jelly Beans […]

Doctor Who fans will instantly recognize this outfit as that of the 4th Doctor, however this Doctor Who 4th Doctor Robe is good for lounging around the house, not for having adventures in time and space. You could still use it for cosplay and adventures. […]

Unless you really like peppermint, candy canes can be pretty boring. Sure, there are flavors like Bacon and Pickle available now, which are fun for us geeks, but they aren’t the type of thing you want to snack on frequently. However, these Jelly Belly Candy […]