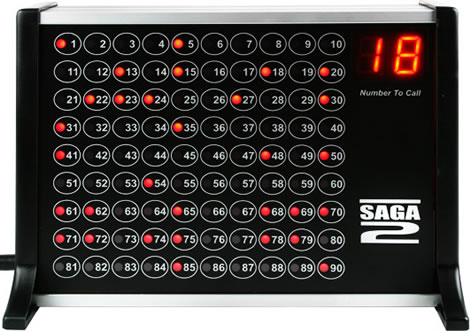 This digital bingo calling box displays the the selected numbers with large digits on its screen, all to make sure that no numbers are misinterpreted.

With just a click you can re-select a number from the Pick and Mix, which displays on a small screen at the back for your advantage, and the large screen at the front displays this number for the audience. It also displays all called numbers on its grid, indicated with a small red dot.

When you’re halfway there you can clickety-click on the Total Calls button, and it will tell you how many calls up to that point. If a number is missed which is Unlucky for some you can recall the previous number with the Recall button. To re-set the box to start a new game, simply press Total Calls and Select button together. 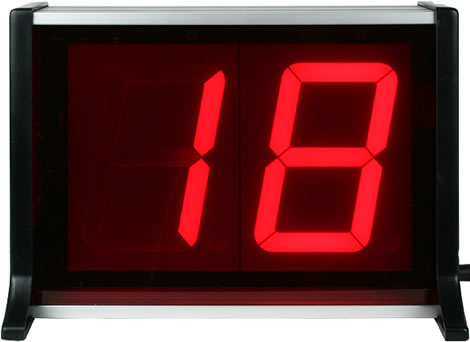 The Professional Bingo Calling Box is available from the Drinkstuff.com website for £229.99 (about $459 USD).

If you love bingo and everything that has to do with it, then you’ll enjoy having these Bingo Card Plates around. Aside from the fact that you can actually use them to play, you can also use them to serve up some sandwiches and snacks […]

Building a dinosaur from scratch is super-easy according to the Jurassic Bingo T-Shirt. Okay, it might not be as memorable as Ian Malcolm’s flirty discussion about chaos theory or his meme-worthy ‘life… uhhh… finds a way’ quote but anyone who saw Jurassic Park probably remembers […]

If you got hooked on huge digits after having read about the Professional Bingo Calling Box, this wall clock might be right up your alley. Measuring 1 metre by half a metre these clocks really are BIG, but whilst massive they weigh in on the […]

This Batman Joker Calling Card Hand Statue features the villain’s gloved hand and comes with four different removable Joker cards for multiple display options. It stands about 10 1/2-inches tall. This statue is no joke! It will look menacing in your collection as if the […]

Technology has come a long way in the past few years, spawning games with control buttons approximately the size of a pinkie nail, but the Click Arcade Button Watch brings us a button similar to those that existed in the glorious infancy of the time-honored […]

With the Kikkerland Digital Travel Luggage Scale, you can easily determine exactly how much your luggage weighs. These days this is more important than ever, because most airlines strictly enforce weight limits and charge exorbitant fees for overweight baggage. If your bag weighs 51 pounds […]

Everything’s going digital these days, and that includes your wristwatch. The Mirror Universe LED Digital Watch is a futuristic and high-tech looking timepiece that displays the time and looks good while doing so. But it’s more than just a watch. When it’s on standby mode, […]