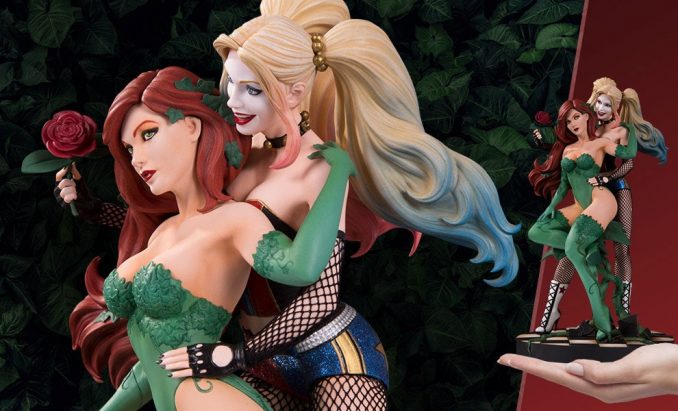 Two of Gotham’s most famous villainesses are together in this spectacular DC Collectibles Harley Quinn & Poison Ivy Statue by Emanuela Lupacchino. As part of the DC Designer Series, this limited edition statue measures 10.75″ tall and expresses the passionate relationship between these two lascivious characters.

Designed by Emanuela Lupacchino and sculpted by Jack Mathews, this limited edition polyresin statue would look great in your collection. Each of the 5,000 pieces in the series is individually numbered.

This stunning DC Designer Series couple statue features two of Gotham City’s most famous villainesses, Harley Quinn and Poison Ivy, and showcases their close and loving relationship as portrayed in the comics.

Designed by amazing artist Emanuela Lupacchino, this statue captures the passionate feelings that these two characters have for each other, even while living in a city as crazy and intense as Gotham. Don’t miss out on this iconic statue, which releases just in time for Valentine’s Day 2020. Limited Edition of 5,000.

This DC Collectibles Harley Quinn & Poison Ivy Statue is available to pre-order for $224.99 at Entertainment Earth. It is expected to ship in early 2020. You can also find it at Sideshow.