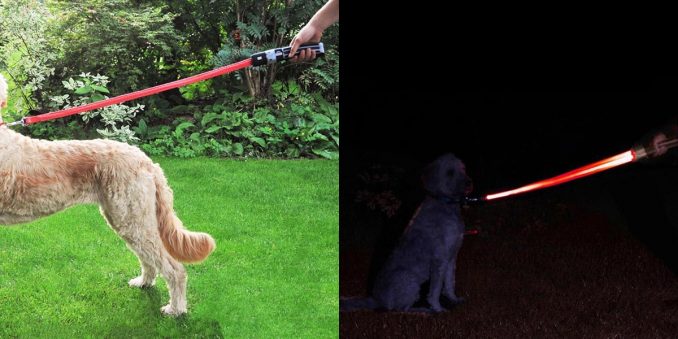 Keep your pet in control even on the Dark Side of the day with the light-up Darth Vader Lightsaber Dog Leash. It has a comfy neoprene handle that looks like Vader’s lightsaber handle with a red leash that looks like his blade. At night it looks even better because it has an LED light strip so that the “blade” lights up at the touch of a button. It even plays lightsaber sound effects!

This Darth Vader Lightsaber Dog Leash is officially licensed Star Wars merchandise. It is powered by included lithium-ion batteries, which can be recharged via the included USB cable. You can choose between three settings for the lights: constant, blinking, and fast blinking.

Keep your beloved pooch under control with your very own Star Wars Darth Vader Lightsaber Dog Lead; never again will your K9 stray to the light side. The LED strip will allow you to safely walk your dog at night – and you’ll look the part doing it!

The handle and red lead correspond to Darth Vader’s Lightsaber, and when the button is pressed to illuminate the lead, the iconic sound effect is made as well! The chargeable LED strip has an 8-16 hour battery life. This depends on the light setting you use (blink, fast blink and constant). We have also included a handy USB charger cable with each Dog Lead, so that you can easily charge it in your computer or USB wall plug.

The trigger hook mechanism is standard and will attach to any dog collar. The neoprene wrapped handle is comfortable to hold.

Designed and manufactured by The Monster Factory. Officially licensed with Disney Star Wars.

Buy the Darth Vader Lightsaber Dog Lead for £39.99 direct from The Monster Factory. It is also available at TheFowndry where it costs £39.99 ($52 US).

If your dog is into the Dark Side, check out the Death Star Pet Tent and the Darth Vader Dog Bowl.

You can take your pet from off-leash to on-leash in the blink of an eye with the PAWSE Automatic Dog Leash. Most cities have leash laws these days but you can usually find a nice park or something that allows your furry friend to run […]

If you ever feel like you’re packing for an around-the-world trip when it’s time to take the dog for a walk, the Smart Dog Leash will make your life a lot easier. There’s no doubt if this leash found its way to Middle-Earth, it would […]

Have you ever caught your dog watching old Star Trek episodes? Me too. Trek dogs will appreciate this Star Trek Uniform Dog Leash. They like to dress up like their favorite heroes too. This piece of officially-licensed Star Trek: The Original Series merchandise is a […]

Do today’s headlines have you thinking about wieners? Are you looking for that special leash to separate your dog from the everyday one? How about this Sausage Link Dog Leash. It goes perfect with all those little trendy hotdog dogs. The comfortable 44″ nylon leash […]

We recently showcased the awesome Chewbacca Dog Bowl, but some pets (and owners) belong to the Dark Side. For them, there’s the Star Wars Darth Vader Dog Bowl. This one is easy to recognize with the sleek black design and iconic button panel. Being Supreme […]