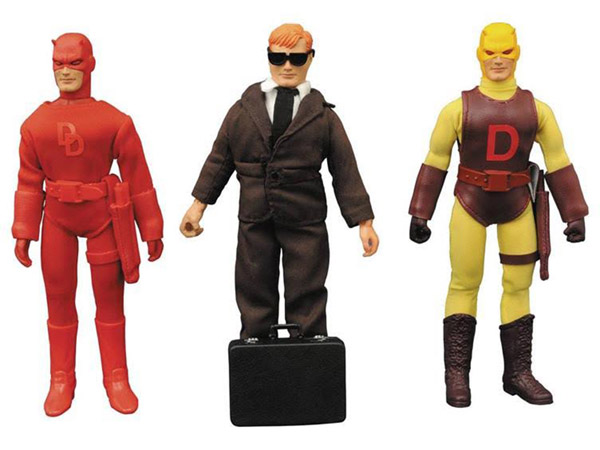 The Daredevil 8-Inch Retro Action Figure Set gives you all the Matt Murdock action you could want, with cool retro style.

The Man Without Fear is ready to take on the villains of Hell’s Kitchen with three distinct looks. Attorney Matt Murdock tries to make the system work in a court of law, while Daredevil, dressed in either his iconic red costume or his classic original yellow costume, deals with the bad guys who escape the long arm of the law.

All three figures stand 8-inches tall and feature interchangeable heads and hands, along with a booklet about Daredevil, retro-style figures, and the creation process of this action figure set.

The Daredevil 8-Inch Retro Action Figure Set will be available August 2016 but it can pre-ordered now for $69.99 at Entertainment Earth.

This Daredevil 1:12 Collective Action Figure depicts Matt Murdock, the man without fear in his red suit. He comes with various accessories and features over 32 points of articulation! Daredevil comes with interchangeable parts, and a deluxe collector friendly fifth panel window box and a […]