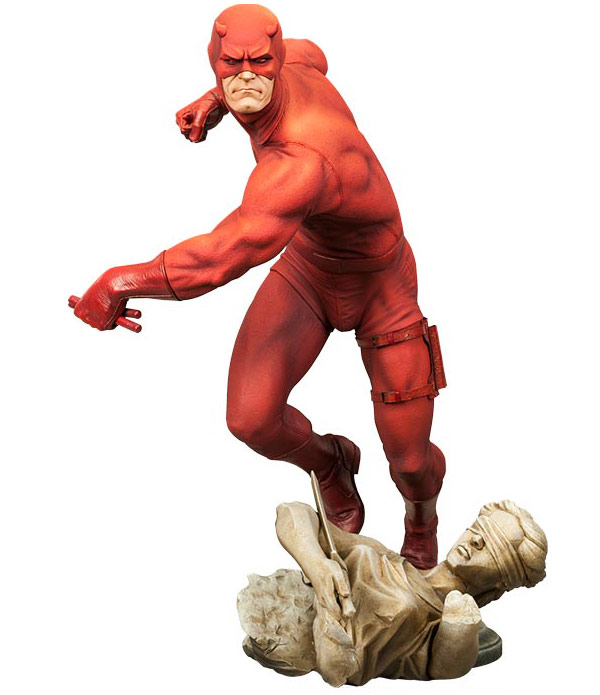 Justice is blind… and so is attorney Matt Murdock, but as the Daredevil Premium Format Figure reveals, the sight-impaired Man without Fear doesn’t let a little thing like that stop him when it comes to cleaning up crime in and around Hell’s Kitchen.

This 17-inch-tall figure features Double D himself stepping over the fallen remains of a Lady Justice statue. Matt Murdock might be restrained by the law in court but Daredevil has free reign. He’s not interested in law; he wants justice. Daredevil’s detailed costume features fabric detail, a raised DD on the chest, and those iconic horns on his mask. His billy clubs are gripped firmly in his hand, with his weapons holster strapped to his leg.

The Daredevil Premium Format Figure will be available March 2015 but it can be pre-ordered now for $399.99 (or for as little as $68.40/month) at Sideshow Collectibles.

Daredevil ‘In The Blood’ T-Shirt

The Man Without Fear isn’t afraid to bleed on the Daredevil ‘In The Blood’ T-Shirt. Before he was the big red double-D, Matt Murdock was the intimidating Man in the Mask. It’s not the greatest superhero name in the world but everyone in Hell’s Kitchen […]

Matt Murdock’s punch-happy alter-ego has never looked cuter than he does as the Daredevil Q-Fig Diorama. If you can’t beat them in the courtroom, you beat them up on the streets. At least that’s the way it works when you face attorney Matt Murdock, who […]