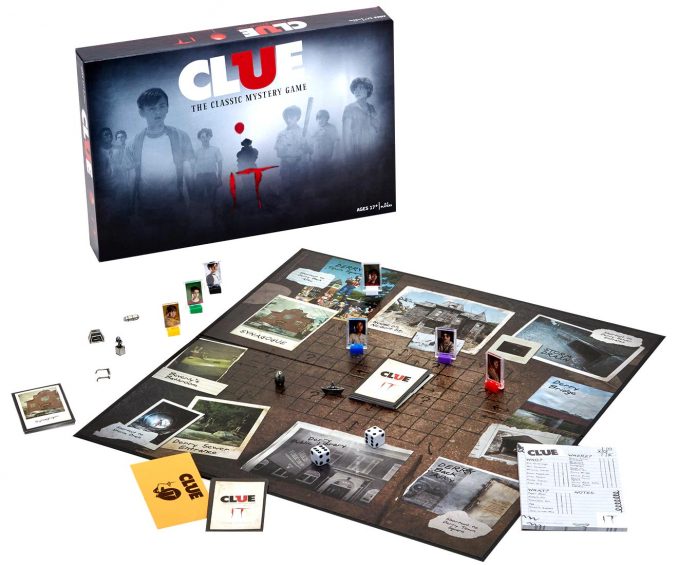 Clue: IT Edition Board Game is the classic mystery game updated based on the recent movie adaptation of the Stephen King novel. It allows you and your friends to take the roles of the members of the Losers’ Club moving around locations in and around Derry represented on the game board.

In the IT Edition of Clue, there’s a twist because you already know Pennywise is the bad guy. Instead of naming a suspect, you need to figure out who Pennywise will abduct, what object he will use to lure them (paper boat, Jack-in-the-Box, Eddie’s pill, Richie’s glasses, television set, or egg), and where he will take them from.

Pennywise has been terrorizing the town of Derry, Maine and it’s up to the Losers’ Club to determine how he will strike next! Taking on the roles of the members of the Losers’ Club from IT, players will move around the game board representing locations in and around the town of Derry. Be the first to determine WHO will Pennywise abduct, WHAT object he will use to lure them and WHERE he will take them from. Is this game real enough for you?

Kids have been playing with paper boats for centuries. It’s fun to make your boat then set it in the water and watch the wind move it along slowly. This PowerUp Boat Motorized Paper Boat Kit put a modern twist on the paper boat. It […]

It Pennywise Burst a Box Jack-in-the-Box

Originally jack-in-the-box toys weren’t creepy, even though their action was basically a jump scare. Now horror movies have made them scary, just as they’ve associated nursery rhymes with sadness and creepiness. Mezco Toyz takes it to a whole new level with this new It Pennywise […]

When you take one of the best classic board games and transform it using the characters, setting, and theme of one of your current favorite movies, TV shows, or comic books, it makes it so much better. For example, take Deadpool Collector’s Edition Monopoly, Rick […]

It’s time to journey to Westeros with Game of Thrones Clue, so you should expect to be busy for a while because there’s always plenty of murder going on when one covets the Iron Throne. It’s Clue, with a GoT twist. Forget about Colonel Mustard, […]