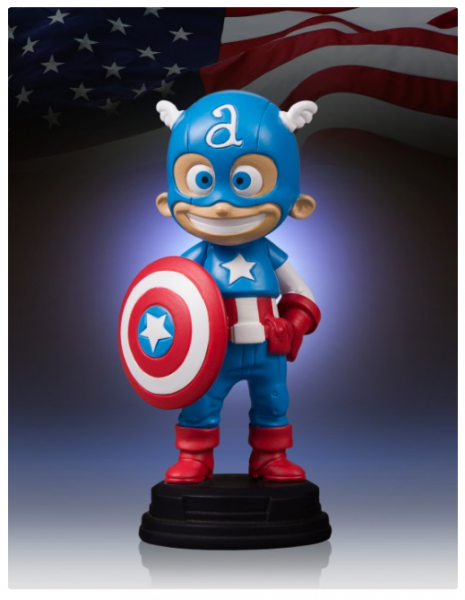 Thanks to his ice-nap, Captain America looks a lot younger than his actual age, but the Captain America Marvel Skottie Young Statue takes things to the extreme level, giving us a patriotic Avenger who still needs to be accompanied by an adult when crossing the street.

If you read Marvel Comics, you’ve probably seen the baby variant covers created by artist Skottie Young. Gentle Giant has taken inspiration from those covers to create a line of baby variant statues, and it’s only right that the First Avenger be the first statue in the series.

Standing 4 1/2-inches tall, Captain America is ready to fight for truth, justice, and juice boxes in every lunch box.

The Captain America Marvel Skottie Young Statue will be available October 2016 but it can be pre-ordered now for $64.99 at Entertainment Earth.

The armored Avenger gets babied with the DC Comics Harley Quinn by Terry Dodson Red White and Black Statue. Based on the Marvel Babies collection by artist Skottie Young, this 5-inch-tall statue features Baby Iron Man rocketing into action with his boot repulsors. Can he […]

This Thanos Marvel Skottie Young Animated Statue features the love-starved “Mad Titan” himself, Thanos! This animated design is inspired by artwork found in the pages and covers of Marvel Comics. Thanos has his balloon in hand and was digitally sculpted, and then printed out on […]

The Man Without Fear becomes the Boy With Just A Little Bit of Fear with the Marvel Daredevil Animated Statue. Based on Skottie Young’s baby version of the character featured on the variant cover of Daredevil #1 (2014 All New Marvel Now Series), this little […]

Man out of time Steve Rogers is probably more comfortable with vinyl records than digital downloads, making the Captain America: The First Avenger Vinyl LP the perfect way to listen to music from The First Avenger. When he’s not busting HYDRA skulls with his shield, […]