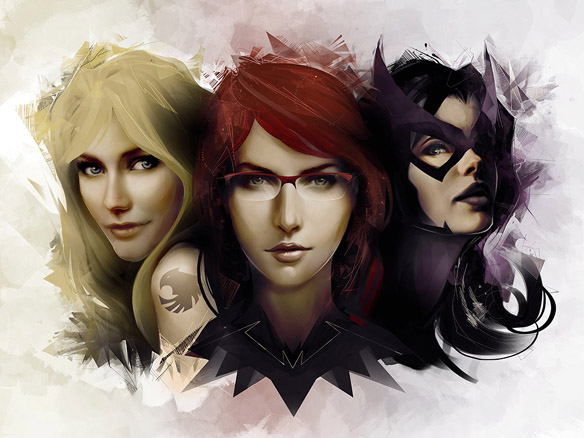 The roster has included a wide variety of members but the Birds of Prey Art Print offers an artsy look at the three core members who are the most widely-known of the crime-fighting team.

DC Comics characters ranging from Lady Shiva to Blue Beetle have been associated with the Birds of Prey but three faces usually come to mind when the mostly-female team is mentioned – Barbara Gordon AKA Oracle, Black Canary, and the Huntress. After the events of Flashpoint, crippled Barbara regained the use of her legs, once again taking on the mantle Batgirl. While she’s taking a temporary leave of absence from the BoP to fight crime as a caped crusader again, this 18-inch by 24-inch print shows the connection with both sides of her life with a stylish bat logo beneath her character.

The Birds of Prey Art Print is available for $30 at Jeff Langevin’s Etsy store.

Do you ever feel like just hitting something? Then hit a bop bag. One of these Angry Birds Inflatable Bop Bags. Fans of the hit gaming franchise can take out their aggression on these things or just knock them around to have a fun time. […]