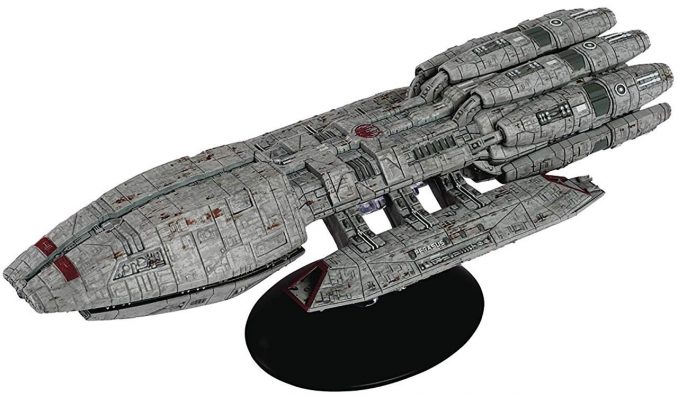 Pegasus, a Mercury-Class Battlestar, was one of the most advanced military ships in the Colonial Fleet. This Battlestar Pegasus ship was created by Eaglemoss working closely with the Galactica visual effects team. The result is an incredibly detailed and accurate rendition of this iconic spacecraft. While the fictional ship measured 1,789 meters in length, this one is a much smaller scale, measuring about 10″ long. The included collectors magazine is 16 pages in length.

Admiral Helena Cain requests that you add this Battlestar Galactica Battlestar Pegasus with Collector Magazine #8 to your fleet. Created by Eaglemoss in close work with members of the modern Galactica VFX team to ensure that this is as accurate as possible, it measures about 8 to 11-inches long and is made of ABS plastic. The accompanying magazine profiles the ship and features interviews with the show’s creators, including Ronald D. Moore!

If you are looking for the most powerful ship to survive the Cylon attack, Pegasus also known as ‘The Beast’ was one of the most advanced and powerful ships in the Colonial fleet. Discover more about Pegasus in the Battlestar Galactica Ships Collection!

Battlestar Galactica Pegasus Ship from the 1978 series Battlestar Galactica was a force among Battlestars, and one of only two to survive the Cylon attack on the Colonies. Pegasus has two twin runway flight pods, used by Vipers and Raptors for launching and landing. 90 Vipers are lost attacking a Cylon communication relay, but Pegasus still boasts a sizable fleet. The ship has a power-plant befitting its name, employing eight sublight engines for propulsion. In addition to manoeuvring thrusters, it also has a hyperjump FTL core engine.

This Battlestar Galactica Pegasus Ship is available to pre-order for $59.99 at Entertainment Earth. It is expected to ship in October 2019.

This Battlestar Galactica Colonial Seal Coaster Set looks super amazing. You have to love that seal. The design is based on the original phoenix plaque that hung in the Galactica’s CIC. It will make you feel like you are in the fleet. You get 4 […]