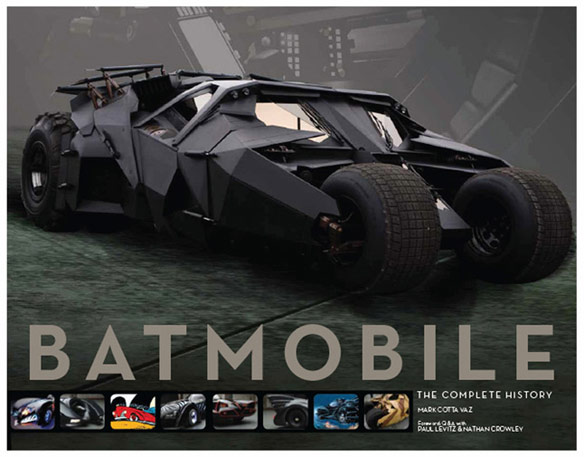 Batman’s gadgets and goodies come and go but he’s had an awesome ride ever since he first put on the cape and cowl, and Batmobile: The Complete History covers every incarnation of the car known as the Batmobile.

Things have changed a lot through the years, with the Batmobile going through a wide variety of looks, ranging from a black car with a bat head and fin to the powerful Tumbler in Christopher Nolan’s Batman trilogy. When the first Batmobile appeared in the comics, it didn’t even have a special or unique look; it was just a plain red convertible.

This 148-page, hardcover book talks about all of them, with stunning gatefolds, detailed specs, blueprints, and historical comparisons.

Batmobile: The Complete History is available for $23.01 at Amazon.

Have the Batmobile deliver cookies to you with this awesome Batmobile Cookie Jar. It’s the perfect cookie jar for Batman fans and it looks amazing. This cookie jar shaped like the Batmobile is made of glazed ceramic for a nice shine as if it were […]

There have been a lot of Batmobiles appearing on the big screen in the past few years, but none of them even come close to rivaling the classic style of the 60’s small screen version, and this Replica Batmobile can actually be yours. The classic […]