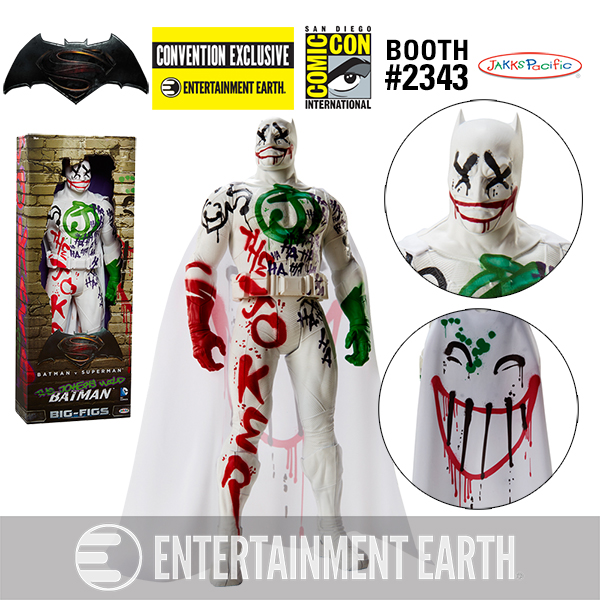 If you saw Batman v Superman, you probably remember the scene featuring Robin’s costume, spray-painted with a taunting message from the Clown Prince of Crime. This time around, the Joker got his hands (and his paint) on the Caped Crusader’s crime-busting costume.

Joker-white with red, black, green, and purple graffiti, the 19-inch-tall figure features 7 points of articulation and a box that displays Gotham City walls that have endured the same type of graffiti attack.

The Batman v Superman: The Jokers Wild Batman 19-Inch Big Figs Action Figure will be available July 2016 but it can be pre-ordered now for $59.99 at Entertainment Earth.

NOTE: This item will first be sold at San Diego Comic-Con 2016 at the Entertainment Earth Booth #2343. If supplies remain after the show, your order will be filled and shipped to you then, in August 2016.

The Batman v Superman: Dawn of Justice Batman 31-Inch Scale Big Figs Action Figure is based on Batman’s appearance in the hit movie. This is a massive Batman figure. It will tower over everything else in your collection and is a must have for DC […]

The DC Comics Tribute Series Batman 19-Inch Big Figs Action Figure stands 19 inches tall and this Dark Knight has premium cell shading decoration and a real fabric cape. This figure is a must have for your DC Comics collection. It is going to look […]

These Impractical Jokers Action Figures will be a hit with fans. They depict the gang from the hit TV show in some of their funniest pranks ever. Collect Q Tony Gunk, Joe Captain Fatbelly, Sal The Bog Monster and Murr Ferret Boy. Collect them all […]