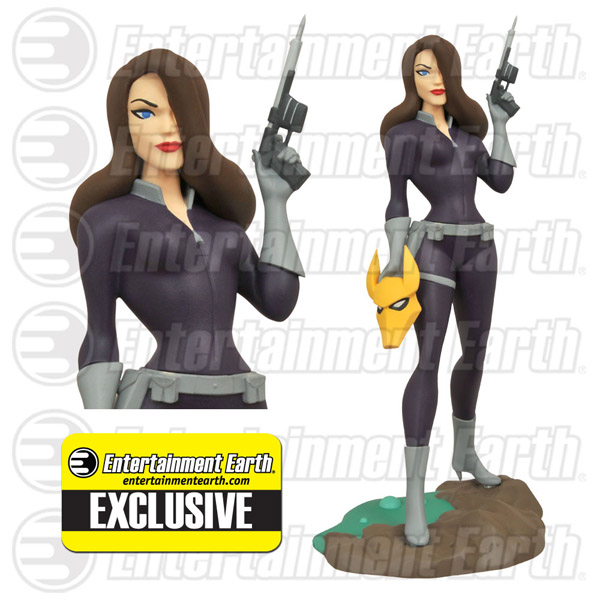 The daughter of Ra’s Al Ghul steps out of the shadows with the Batman: The Animated Series Talia Al Ghul Femme Fatales Statue, and she’s ready fight for her right to be a part of your Batman TAS collection.

She won the heart of Batman, gave birth to a boy who would become Robin, and has a father who’s basically immortal. She’s also incredibly deadly. Talia is the definition of Femme Fatale and she proves it with this 9-inch-tall statue because she’s wielding both a gun and the mask of Anubis. Oh, and that green stuff at her feet. That’s a bit of the Lazarus Pit so she’ll have you at a disadvantage if you try to take her down.

The Batman: The Animated Series Talia Al Ghul Femme Fatales Statue will be available November 2015 but it can be pre-ordered now for $44.99 at Entertainment Earth.

The Goddess of Thunder is rocking some serious guns with the Femme Fatales Lady Thor Statue. When Thor was no longer worthy of wielding his might hammer, Jane Foster became the new Thunder God, complete with a snazzy new uniform and shiny helmet that hid […]

This DC Masterpiece Femme Fatales Series 2 Statues with Collector Magazine set gives you a whole set of DC babes with an awesome magazine to read too. This set features 3 of Gotham City’s feistiest females: Harley Quinn, Poison Ivy and Batgirl. This boxset contains […]