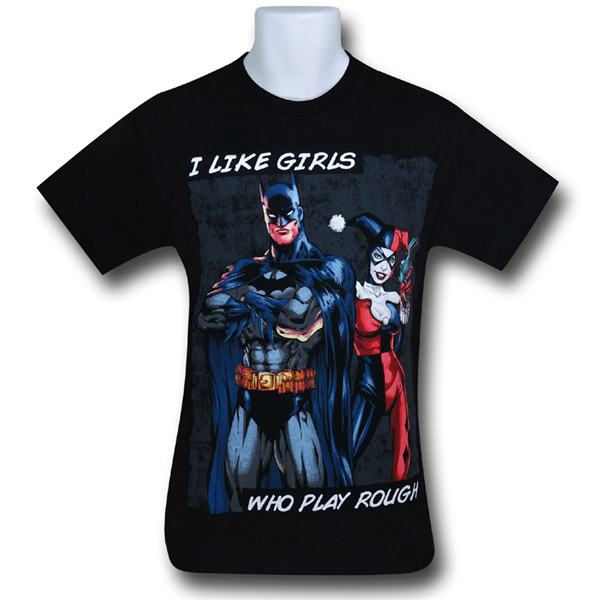 Let the ladies know what kind of woman you’re looking for by wearing the Batman Harley Plays Rough T-Shirt when you’re out and about… but be cautious of anyone actually wearing a red and black jester outfit, especially if they know anyone named Mister J.

Catwoman might get a little jealous but even she would have to admit that Harley Quinn is in a league all her own when it comes to rough-playing women, but there’s nothing between her and the Bat besides a harmless flirtation so there’s really nothing to worry about.

The black 100% cotton tee features Batman and a gun-toting Harley Quinn, along with the phrase, “I like girls who play rough.”

The Batman Harley Plays Rough T-Shirt is available for $19.99 at SuperHeroStuff.com.

If Harley Quinn says she wants to play with you, wear the Arkham Knight Harley Plays Rough T-Shirt so you’ll remember that she probably doesn’t want to play pretend tea party. Harley is dressed for play-time on this 100% cotton tee, and she’s not looking […]

The Harley Quinn Bat Kiss T-Shirt proves that Harley has a very special way of keeping Batman’s attention. Poor Joker. It looks like Harley Quinn has ditched the Clown Prince of Crime for someone tall, dark, and brooding. It’s probably the car. Chicks dig the […]

She has a white face so why not put her in the White House? Wear the Harley Quinn for President T-Shirt to let everyone know who you want in charge in 2016. Sure, her boyfriend is the Joker, she’s broken the law a few times, […]

A picture can be worth a thousand words, and the DC Comics Arkham City Batman And Harley Quinn T-Shirt has a lot to say. At the very least, Harley has a lot to say and she’s determined to be heard. The sexy and dangerous Harley […]