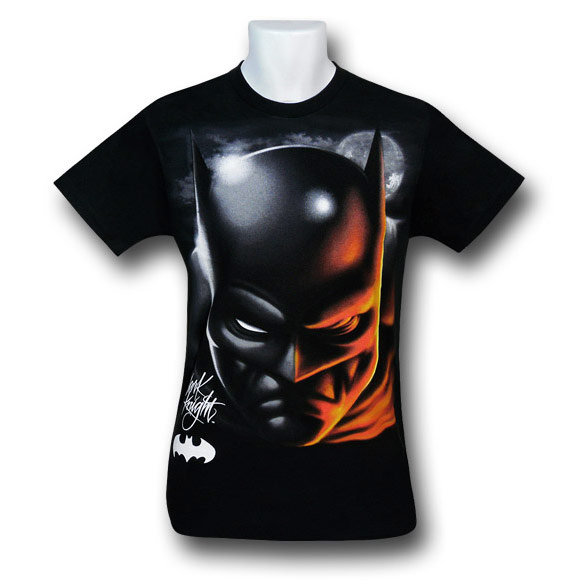 Batman’s greatest weapon is darkness, as he freaks out the bad guys by swooping down from the shadows, but the Batman Dark Knight Airbrushed Glow T-Shirt shows that the vigilante is still pretty tough even when he’s surrounded by an artistic glow.

Okay, the dark might be an ally, but another weapon the Dark Knight uses in his fight against crime is his menacing scowl, which would probably still be intimidating if he was dressed up in a rainbow-colored bat-suit, and he has that grim stare turned up to +10 in this scene.

The 100% cotton t-shirt features an airbrushed Batman standing in front of a moonlit sky, glaring out at anyone who dares approach you, although you’ll probably still have plenty of people willing to overcome their fear to get a better look at the artistic goodness.

You can get the Batman Dark Knight Airbrushed Glow T-Shirt for $21.99-$24.99 at SuperHeroStuff.com.

This 3-pack of Batman Glow-in-the-Dark Panties is perfect for the Bat-fan who wants to have a glow about them. With this three pack of Batman glow-in-the-dark hipster panties, you’ll always have the perfect pair at hand for crime-fighting emergencies. They will see you coming that’s […]

Glow In The Dark Zombie Backpack