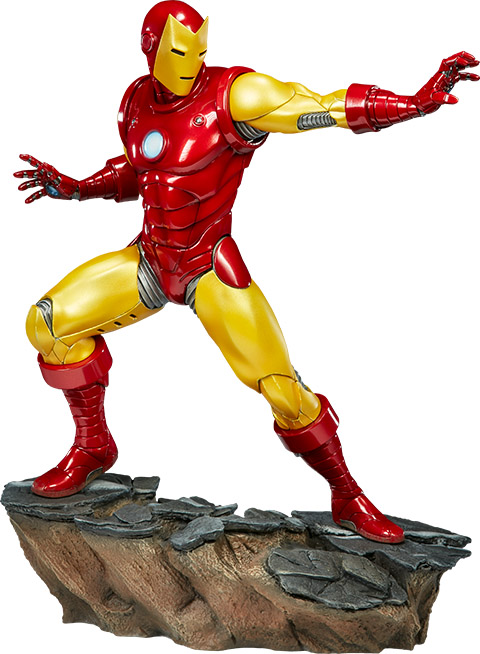 An armored Tony Stark, complete with an interchangeable classic look, is ready for action with the Avengers Assemble Iron Man Statue.

Captain American might be the First Avenger but Stark’s armored alter-ego is the Iron Avenger, and the red-and-gold hero strikes a heroic pose on this 15.75-inch statue. In addition to eye-catching light-up LEDs in the chest and hands, the statue features an interchangeable portrait that spotlights Iron Man’s original pointy-headed look.

Other heroes will soon be joining Iron Man, with Captain America, Thor, and the Hulk expected to be added to the Avengers Assemble collection.

The Avengers Assemble Iron Man Statue will be available Jul 2017 – Sep 2017 but it can be pre-ordered now for $360 at Sideshow Collectibles.

Bring home the thunder with the Avengers Assemble Thor Statue and watch all your friends give you praise worthy of a god. Standing 25 1/2-inches tall and striking a heroic pose (as Asgardian gods tend to do), the Mighty Thor holds Mjölnir high, ready to […]

The first Avenger returns to a classic look with the Avengers Assemble Captain America Statue. Before the Marvel cinematic universe had everyone picturing Chris Evans as Captain America, the red, white, and blue hero wore a costume that included blue scale armor and little white […]

On cold nights you need Earth’s mightiest heroes to protect and warm you. That’s what the Avengers Assemble Fleece Blanket is all about. The Avengers team has assembled on this blanket just for you. It features Captain America, Black Widow, Hulk, Iron Man, and Thor. […]