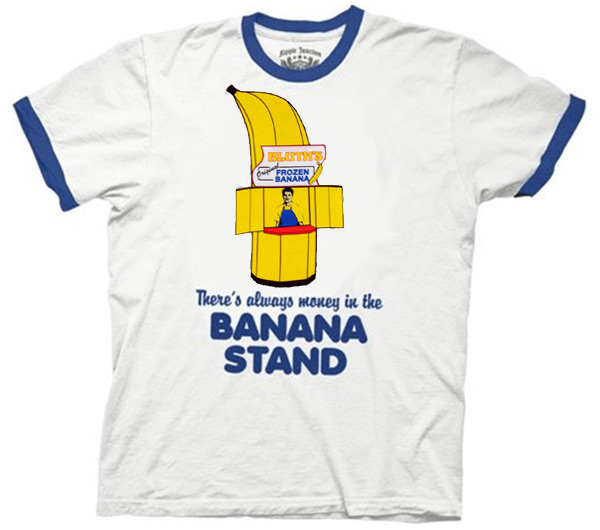 This Arrested Development There’s Always Money in the Banana Stand T-Shirt is a great reminder of this hilarious show. Even though many of us loved the show and it was critically acclaimed, it’s ratings were never good enough, so it lasted just a short three seasons. Luckily, Netflix is bringing it back with 10 new episodes that will become available exclusively to Netflix subscribers in 2013.

There’s always money in the banana stand…. Don’t burn it down.

Order this Banana Stand T-Shirt for $18.95 at Amazon.com. It is officially licensed, 100% cotton, and available in medium, large, x-large, and xx-large sizes.

If you have been enjoying the latest season of Arrested Development on Netflix, you might want to celebrate the return of the Bluth’s with this neat Bluth’s Original Frozen Banana T-Shirt. It’s awesome. This shirt will let everyone know that you are a fan of […]

Sometimes you’re just in the mood to have a banana, but what if your only mode of transportation is a bicycle. Have you ever tried eating a banana on a bicycle? Okay, honestly it’s not that hard, but the Banana Holder provides a way to […]

Some men just want to watch the world burn, while others are just looking for a few laughs. The Joker Watch the World Burn T-Shirt reveals the one man who wants to do both. Alfred shared some great wisdom in “The Dark Knight” when he […]

For all you bluetooth lovers out there, here is a different but fun Bluetooth Banana Handset.  This 2.4GHZ banana bluetooth is great way to standout from the everyday crowd and express yourself.  Going bananas will have a whole new meaning now.  The kit comes with […]

Do you and your bestie go together like PB&J? Maybe with a few slices of banana thrown in there to symbolize that your relationship is just that much over the top? Then you should honor your everlasting friendship by wearing the matching Peanut Butter, Banana and Strawberry Jelly BFF Rings. These […]