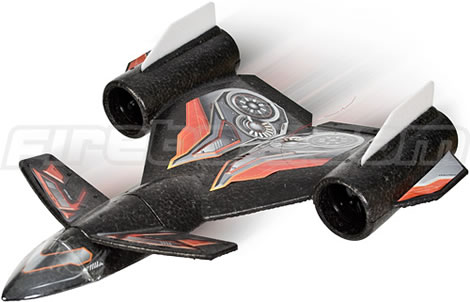 The X-Twin Thunderjet is a powerful radio controlled flying machine, equipped with a pair of duct-fan engines for some extra high-speed enjoyment.

Like its real life USAF counterpart, the sinister Thunderjet looks almost unreal. In fact it reminds us of Firefox, that lethally sophisticated jet from the dodgy Clint Eastwood film of the same name. Unlike Firefox, however, the X-Twin can’t be controlled via thought impulses; you control the action with a twin-toggle, digital proportional transmitter that doubles up as a charging unit for its built-in lithium polymer battery. (20-30 minutes should give flight times of around 5 minutes).

The X-Twin Thunderjet is available in three different colors (Blue, Red and Yellow) for £24.95 (about $50 USD9 from Firebox.

The Apple iPad and iPad 2 are becoming pretty common in today’s society. Like other tablet devices, users like the light weight, functionality, and portability they offer; not to mention all the cool apps that help keep your kids entertained on those long road trips. […]

The X-Twin Acrobat ($51) is a radio controlled plane from the creators of the popular PicooZ micro helicopters. This aircraft comes with a three channel remote, giving you more control and the ability to fly three dimensionally.

This Twin Peaks Welcome to Twin Peaks Sign Monitor Mate Bobble, not BOB-le, is awesome. It is the welcome sign from Twin Peaks and a mini bobble head. It sticks to surfaces with the included non-damaging adhesive pad,like your desk or monitor top. Each is […]

The Ion Audio company has released a new twin video camera that has a somewhat different design approach than the camcorder model that they released earlier this year. Capable of capturing both front and rear video and audio footage, it will totally redefine the way […]

This tiny Bluetooth stereo transmitter by Infinxx allows you to stream music from your iPhone or iPod to a pair of Bluetooth compatible speakers or headphones of your choice. World’s Smallest iPhone Bluetooth Transmitter: Add Bluetooth A2DP Function to your iPhone (2G/3G) & iPod The […]

Remember when you were a kid and nothing was more fun than just flipping the light switch on and off repeatedly? Well the Steampunk Toggle Switch Plate with its unique design is sure to have you reminiscing about the old days as you enjoy that […]

After having seen Mickey Mouse in the shape of an MP3 player, a speaker and a USB flash drive, the popular Walt Disney character is now is building himself a new career as an MP3 player with a built-in FM transmitter.

Remember the radio-controlled 3-channel Micro Mosquito that we wrote about last year? It has now been released in version 3.0, featuring orange LED eyes and an extra pair of legs. Utilizing patented twin rotor technology combined with a horizontal tail rotor and proportional radio control, […]

This stylish little device allows you to transmit iPhone or iPod tunes through any available FM radio frequency and play them in your home or car stereo.