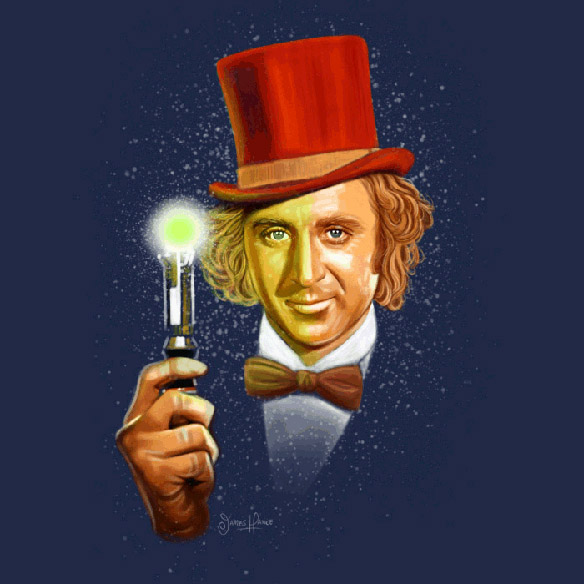 The Wonka Who T-Shirt provides an eye-opening explanation for the candy shop that’s almost too weird for words to describe. A mysterious individual who seems intelligent and insane at the same time? An outlandish wardrobe that seems to borrow from a variety of times and places? Oompa-Loompas? Isn’t it obvious? Willy Wonka is a Time Lord.

The Doctor has enjoyed a variety of foods through his various incarnations, ranging from fish fingers and custard to Jelly Babies, so why not become the most awesome candy manufacturer in the world when taking a break from saving the universe from Cybermen and Daleks and Weeping Angels?

Willy Wonka, as portrayed by Gene Wilder, already looks so much like a Time Lord that no changes had to be made to his appearance at all. Just stick a sonic screwdriver in his hand and it’s super-easy to imagine the TARDIS tucked away in the candy factory, just waiting for him to take a break from candy-making for a trip through time and space. 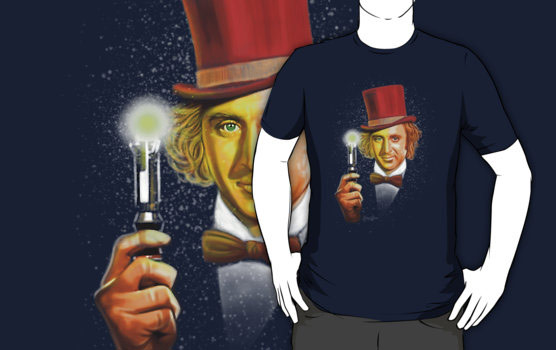 Satisfy your Doctor Who sweet tooth with the Wonka Who T-Shirt for $22.70 at RedBubble.com.

We can’t all have a golden ticket to visit the Willy Wonka factory. Or can we? Yes we can, thanks to this Willy Wonka Golden Ticket Tin Sign. This is an oversized Golden Ticket to display on your wall. Or take it with you and […]

This Willy Wonka Bar Journal has 116 lined pages with Wonka logos at the top and bottom. Use it to create new candy recipes or display it to show your love of the movie. The back endpaper has a folder with your Golden Ticket tucked […]

This Willy Wonka and the Chocolate Factory Playing Cards set is for fans of the classic movie. This deck will make 52 Card Pickup more interesting. Along with every other card game. Now you can play Poker and Black Jack with Willy Wonka. These nifty […]