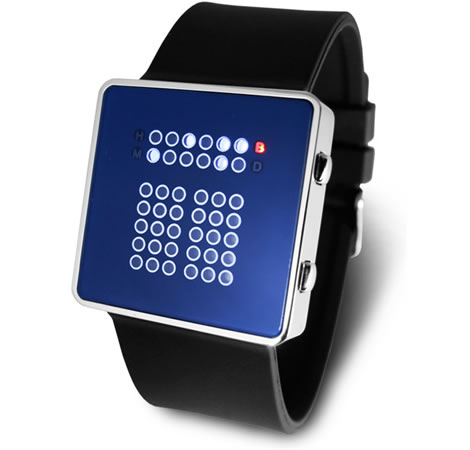 Tokyoflash has announced the Tibida, a watch “combining functional design engineering with LED technology presented in a range of bold colors”.

Hour-centric mode displays the hour in digits on the lower display and minutes on the upper display, each LED representing a progression of five minutes. Perfect for when you need to know the approximate time quickly.

Minute-centric mode displays the exact minutes in digits on the lower display with the upper display representing the progression of hours using twelve LEDs.

Binary is presented on the upper display only. The top line of six LEDs indicating the hour, the second line indicating minutes. To read the time in binary, refer to the example below. Binary is read from the right, the first lit LED representing the number 1. This is then doubled; 2, 4, 8, 16 and 32, a combination of these numbers representing the time in hours and minutes.

Until February 5th 2008, Tibida is available at a special launch price of 12,900 Japanese Yen ($122) including free 5-day worldwide delivery. 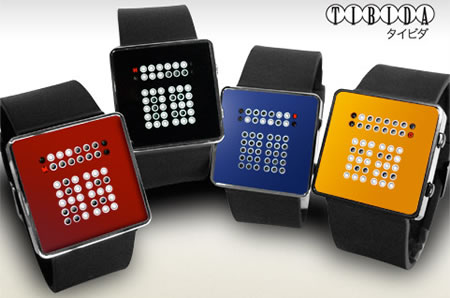 The Japanese watch importer Tokyoflash has announced two new amazing timepieces – Scramble and Progression, both from the Nekura company.

Just like those popular wrist watches that we’ve seen from Kerala and others, you can now get a clock with the same kind of binary time display.

If you still need to buy that man in your life something special for the holidays, this Tokyoflash Kisai Space Digits Watch is sure to make an impression. Like all Tokyoflash Watches, this watch is limited edition and has some unique features. The futuristic time […]

Ever seen binary code converted into an image file and thought it would make a great artsy-looking blanket? Probably not but someone was inspired by the idea and came up with Binary Blankets, offering a unique and eye-catching way to chase away the chill when […]

The line of Kisai aluminum LED watches from the Japanese Tokyoflash company has just been upgraded with yet another unique timepiece with a futuristic appearance.

The list of candidates for an updated version of the 10 Beautiful Geek Cufflinks entry is just getting longer and longer. These beautiful binary cufflinks is the latest example of such a piece of jewelry.

As with the Lightmare Steel LED Watch the Ibiza Ride has also gone from a leather strap model to now offering one in stainless steel.