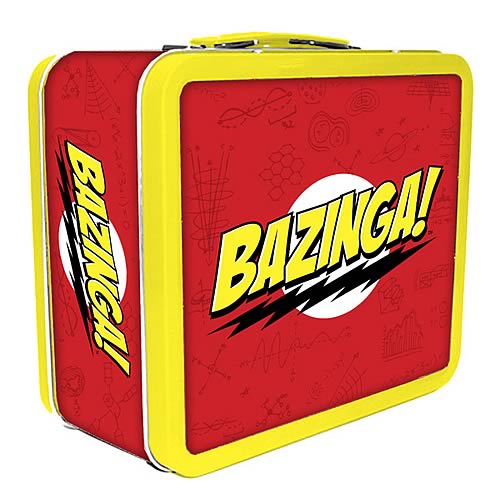 If you are a fan of The Big Bang Theory, then you have probably already seen the Soft Kitty Plush and Soft Kitty T-Shirts.  But have you seen The Big Bang Theory Bazinga! Lunch Box?  With Sheldon’s catch phrase written all over it, you can expect this lunch box to attract a lot of attention; and for good reason.  What the average person with a mere IQ of 110 or so thinks is a lunch box, Sheldon, Leonard, and the rest of the crew could argue is much more than that.  I would explain it to you, but I don’t understand it myself.

You can purchase The Big Bang Theory Bazinga! Lunch Box at ThinkGeek for $15.99 and you can pre-order it at Entertainment Earth for $14.99 with an expected delivery in October 2011. Please note that according to the visual photos from ThinkGeek and Entertainment Earth, the two Bazinga lunch boxes look slightly different.

Fans of The Big Bang Theory will be happy to see that there is a pint glass worthy of genius level humor. The Bazinga Pint Glass lets you enjoy your favorite drink as you sit back and watch Sheldon, Leonard and the rest of the […]

When Sheldon is sick, he likes Penny to sing the “Soft Kitty” song to him just like his mother used to do. Now when you’re sick, you can cuddle with the Big Bang Theory Soft Kitty Singing Collectible Plush. Just squeeze kitty’s paw, and she’ll […]

As you head back to school wearing your Soft Kitty Hoodie, you’re going to need something to carry your lunch in. Sure you’ve seen many cool lunchboxes at GeekAlerts, but for the first day of school you’ll want something special like the Big Bang Theory […]

While traveling this summer, you’ll probably have to pack light and that means leaving the Soft Kitty Pillow and Soft Kitty Singing Plush at home. But worry not, you can still get your daily Soft Kitty fix with The Big Bang Theory Soft Kitty Clip-On […]

What sweater do you throw on when you’re feeling sick, drugged or injured? The Big Bang Theory Soft Kitty Sweater, of course! Sheldon’s lullaby-turned-mascot has been knit into a soft, grey sweater. If you thought you were cute stuff before, wait till you flaunt this little […]

Enjoy the holiday season in style with the Big Bang Theory Soft Kitty Christmas Stocking. Sheldon approved and ready for the filling, this plush stocking features Soft Kitty wrapping itself around a Christmas stocking. The expression says it all; holidays are time for fun and […]