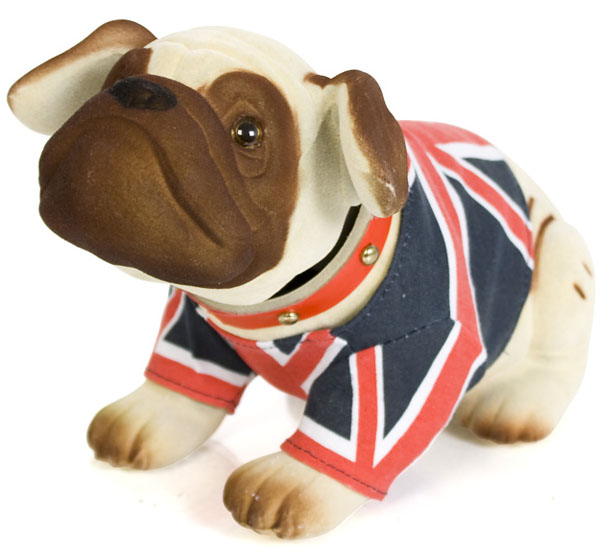 If you follow the Apprentice religiously, then you might have noticed the nodding bulldog that’s made a few appearances on the show. Now you can have your own faux-pet by getting one of these Apprentice Nodding Bulldogs yourself.

The Apprentice Nodding Bulldog is just what its name suggests: it’s a bulldog that nods. And it does so while dressed in some fine themed threads, too.

Well, the usual band of smartly dressed numpties were tasked with selling all manner of goods (and not-so-goods) on the streets of London; our personal favorite being the The Apprentice Nodding Bulldog (we’ve renamed him, now he’s a celebrity), that poor old Tom was charged with knocking out on his South Bank pitch. However, defying all taste and common sense, these plucky pups absolutely flew off the shelves!

Well we couldn’t sit idly by and let these cakes go cold. So for a limited time only (because there’s no way we’re selling these forever) and while stocks last (because we didn’t buy many) you can own this tiny bit of as-seen-on-TV kitsch.

The Apprentice Nodding Bulldog is available from Firebox for £9.99 ($16.)

I’ve always thought learning how to play the piano would be really cool and useful, but I never could commit the time or money for lessons. Well now I can’t use that excuse. The Ion Audio Piano Apprentice turns your iPad, iPod and iPhone into […]

Are you a pet lover living in a place where furry animals are not welcomed? That’s too bad, but you can still fill that empty void with a pillow that looks like a real dog. Introducing Albert, the French Bulldog Pillow. With the Albert pillow, your couch will look like one of […]

French bulldogs are a comical breed of dog, as any Frenchie owner will attest. There’s no denying that these dogs have a lot of personality, and if you love the breed, you can showcase your love thanks to this interesting French Bulldog T-Shirt. Frenchies are […]

A few weeks after getting my puppy, I encountered one problem that I’m sure a lot of other dog owners do: picky eating. My Shih Tzu pup would pick through her food and leave it untouched for hours until I go over and hand-feed her […]