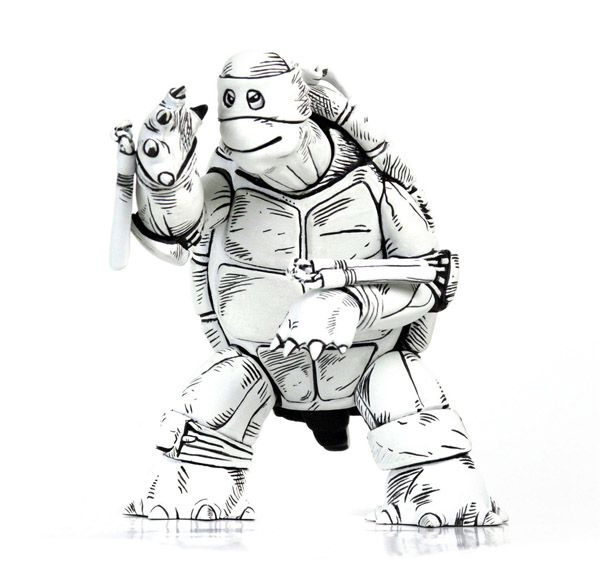 No, your eyes aren’t playing tricks on you. The Teenage Mutant Ninja Turtles The First Turtle Figure actually looks like a drawing, but that’s because it’s based on a drawing.

Once upon a time ago, two guys were kicking back and having a good time, talking about different things. During the chat, they got onto the laughable subject of a turtle that could fight like a ninja. One of the guys even drew a doodle showing what their ninja turtle would look like. Those two men were Kevin Eastman and Peter Laird, and their crazy idea spawned comic books, cartoons, and movies.

Standing nearly 7-inches-tall, the First Turtle lives up to its name, designed to look like that first little drawing that Eastman did on a napkin. If you like the idea but prefer a little color, a green version of the figure is also available with either a red or orange mask. It has 5 points of articulation and illustration-accurate details.

Experience Monopoly in a whole new way with Monopoly: Teenage Mutant Ninja Turtles Edition. Turtle power! This fun version of the classic game features 22 locations from throughout the Nickelodeon cartoon series and includes 6 custom tokens based on characters and items in the show. […]

Recently GeekAlerts has shown you some cool good guy hoodies (Chewbacca, SpongeBob, Thundercats), and now we thought it was best to satisfy your inner evil with this Teenage Mutant Ninja Turtles Shredder Zip Hoodie. Who better to terrorize your friends than the evil Shredder? Wear […]

What time is it? Pizza time of course. This Teenage Mutant Ninja Turtles It’s Pizza Time Bi-Fold Wallet will make you say cowabunga dude! This awesome Bi-fold wallet has an eye-popping pizza design. The interior has card slots, a billfold and clear ID display. It […]