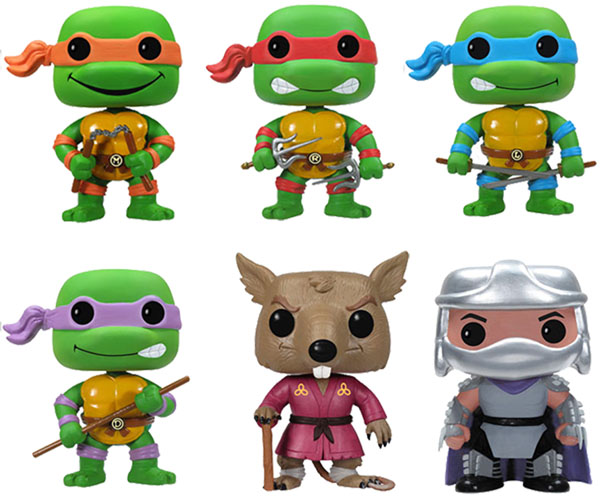 The heroes in a half-shell have mutated once again, transforming into the Teenage Mutant Ninja Turtles Pop! Vinyl Figures, but they’re still able to kick butt so order a few pizzas to keep these little guys happy.

With their signature weapons in hand, these 3 3/4-inch tall vinyl figures are ready for battle, and that’s a good thing because the evil Shredder is once again causing mischief and creating mayhem. Fortunately, the Turtles’ wise mentor, Splinter, has also entered the Pop! world so that he can continue to teach them how to fight the forces of evil… and hopefully make sure the guys don’t go overboard with the pizza.

The Teenage Mutant Ninja Turtles Pop! Vinyl Figures will be available June 2013 but they can be pre-ordered now for $9.99 each at Entertainment Earth. Choose from Raphael, Leonardo, Donatello, Michelangelo, Master Splinter, and Shredder. Also available at Amazon.com.

Recently GeekAlerts has shown you some cool good guy hoodies (Chewbacca, SpongeBob, Thundercats), and now we thought it was best to satisfy your inner evil with this Teenage Mutant Ninja Turtles Shredder Zip Hoodie. Who better to terrorize your friends than the evil Shredder? Wear […]