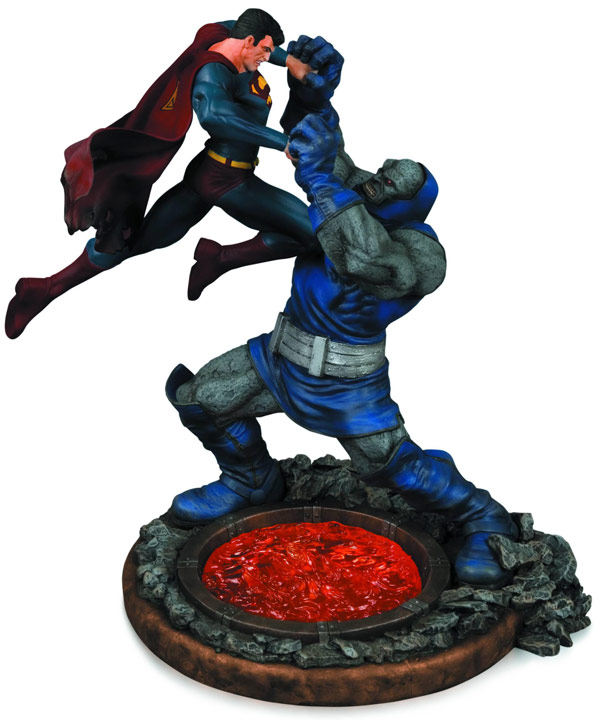 The Man of Steel takes on one of the Top 100 Comic Book Villains of All Time with the Superman Vs. Darkseid 2nd Edition Statue, creating an eye-catching scene for anyone who enjoys Superman collectibles.

Standing 12.5-inches high, the highly-detailed statue is back as a second edition because the statue sold out the first time it was released, and it’s easy to see why. With vivid attention-getting colors, the classic Superman (with red undies on the outside) seems to float in the air as he slugs it out with the master of Apokolips over a bubbling fire pit. You almost expect Darkseid to blast Supes with his Omega Beam.

The Superman Vs. Darkseid 2nd Edition Statue will be available October 2014 but it can be pre-ordered now for $259.99 at Entertainment Earth.

One of the best moments from Return of the Jedi was when Luke found himself in the Rancor pit under Jabba’s palace and had to use his wits to survive the beast. Now you can relive that classic scene with this LEGO Star Wars Rancor […]

Winter is coming and people will soon be cuddling up around the fireplace to enjoy its ambiance, but what if you don’t have a fireplace? The Landin Allure Tabletop Fire Pit lets you enjoy the beauty of an indoor fire without having to worry about […]

Are you ready for some Apokolips? The Darkseid Premium Format Figure is ready to rule over all your other collectibles. He’s battled the whole Justice League and conquered Earth-2, but the nemesis of the New Gods wants more. He wants you. The 26-inch-tall statue features […]

Harness the power of the Omega Sanction and get your hands on the Justice League New 52 Darkseid Statue. The Justice League has fought a variety of bad guys but only one of them has the honor of being known as the god of Evil. […]

The Star Wars Bouquet – 2nd Edition is the coolest gift you can give a geek for any occasion. It is a bouquet of 9 adorable Star Wars characters. It beats flowers every time. Your bouquet ships in a wrap with a bow, ready for […]

How about a black and white psycopath for your shelf? Don’t worry, at least it is a cute psychopath. This Batman Black and White Harley Quinn 2nd Edition Statue is a limited edition statue taken from the designs of Harley’s co-creator, Bruce Timm. This limited […]