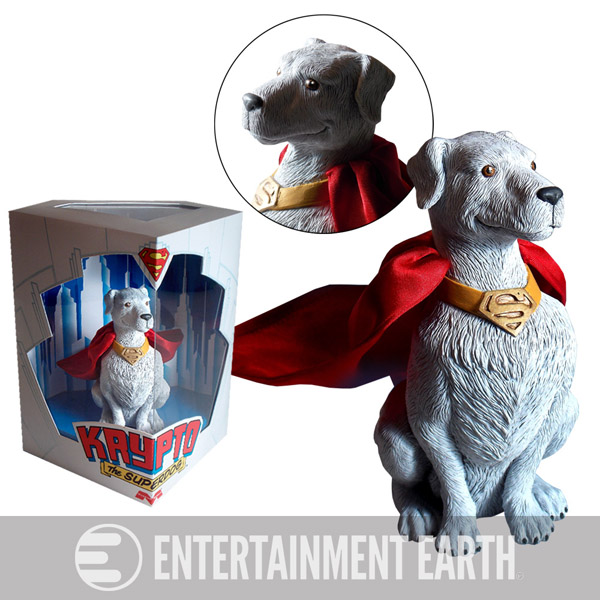 Look! Up in the sky! It’s a bird! It’s a plane! It’s… a dog. Celebrate the 60th anniversary of the Dog of Steel with the Superman Krypto the Superdog Statue.

Krypto has gone through a few changes over the past six decades. Sometimes he’s from Krypton. Sometimes he’s not. Sometimes he meets Superboy. Sometimes he doesn’t discover his master until Clark Kent is an adult, fighting crime as Superman. However, Krypto is always faithful to his master, even sacrificing himself on various occasions to save the Man of Steel’s life. Of course, comics being as they are, Krypto always manages to find his way back to the land of the living.

Standing 4 1/4 inches tall, the stylized statue features Krypto wearing his iconic red cape and a gold collar with the classic ‘S’ symbol on it. The statue comes in a window box shaped like Superman’s logo, with a Metropolis backdrop

The Superman Krypto the Superdog Statue is available for $39.99 at Entertainment Earth.

This Krypto the Superdog Commemorative Edition Set is for fans of super pets! Celebrate 60 years of the world’s favorite canine, Krypto the Superdog! Krypto is based on the classic Superboy and Krypto model kit from 1965. Krypto is made of precision-cast styrene and features […]

A boy and his best friend are ready to defend the world as the DC Comics Super Sons Jonathan Kent and Krypto ArtFX+ Statue 2-Pack introduces us to one half of the world’s finest for the next generation. Soaring out of DC Comics’ Super Sons, […]

The fight of the century is coming and you can celebrate with this Batman v Superman: Dawn of Justice Superman 1:6 Scale Statue. Superman stands about 12-inches tall and this statue features the Man of Steel mid-flight, cape swirling in the wind. This statue features […]

There was the AiKiou Cat Stimulo Feeding Station for your feline companions, and then there’s the dog version. If you can’t get your dog to slow down on the chow, then you might need to get the AiKiou Dog Bowl. There have been several occasions where my […]

The battle between Superman and General Zod in The Man of Steel movie was pretty intense. They wrecked half the city. Now you can relive that epic battle with this Superman Man of Steel Movie Superman vs. Zod Statue. This statue is full of action […]

It’s mostly true – dog is man’s best friend. But every once in a while, there’s that dog who thinks that man is dog’s best servant. And he probably lives in a house like this colonial Dog Mansion. You don’t want to know how much that […]

There’s nothing better than lounging around the house dressed like a superhero and if you absolutely have to do it, you might as well be Superman. This Superman Snuggie Fleece Blanket with Sleeves makes it easy. It’s made of Polyester Fleece and will keep you […]