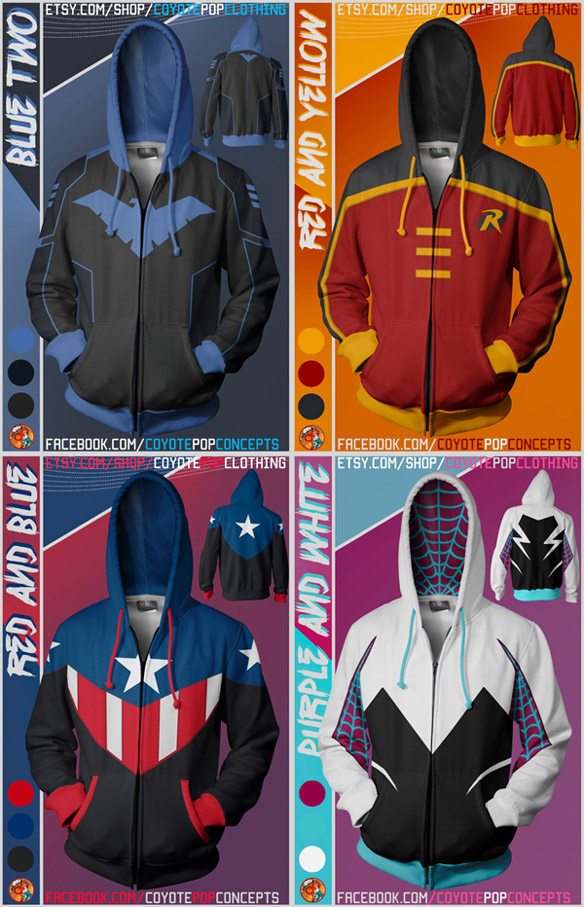 The Superhero Hoodies might not mention any names but you can still probably figure out who’s who on these stylish threads.

Using color combos instead of character names is a smooth move, especially when fans of DC and Marvel can instantly recognize the popular characters depicted on these polyester hoodies, whether you’re a fan of old-school crime-fighters like Robin, the Boy Wonder, or newer characters like Spider-Gwen.

The creator of these cool clothes releases designs in waves, with the current batch being Wave 6. Unfortunately, Wave 6 is expected to end January 23 so don’t waste time if you want to snag one of these.

The Superhero Hoodies are available starting from $69 at CoyotePopClothing’s Etsy store.

There’s no need to be a frustrated superhero wannabe because now everybody can be one. You’ve probably had your mother tell you that you’re a hero in your own right when you were still a young kid and being full of angst while you complain […]

When the weather outside gets frightful, you can feel cozy and delightful with the Spider-Gwen Spiderweb Shrug. Sometimes the temperature’s balance is as delicate as a spider on a web; it’s that infuriating time when it’s a little too chilly for short sleeves but not […]