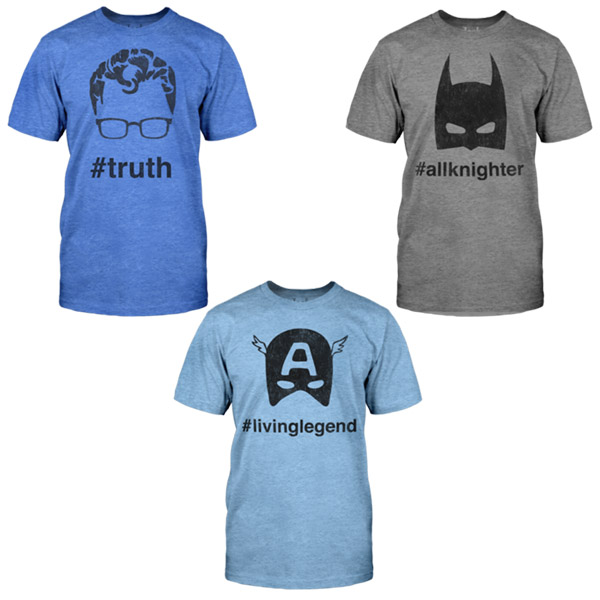 It seems like #hashtags are everywhere these days, so why not on the clothes we wear? The Superhero Hashtag T-Shirts feature three iconic superheroes rendered in a minimalistic fashion, complete with hashtags that perfectly capture their essence.

Batman AKA the Dark Knight has learned to function on practically no sleep at all, pretending to be carefree Bruce Wayne during the day while pummeling bad guys at night so #allknighter is a great description for him.

Superman has always stood for #truth, justice, and the American way, even though he spends a good portion of his life living a lie as Clark Kent.

Captain America, the super soldier that started fighting the bad guys during World War II and still battles the forces of evil in the 21 century is the true definition of #livinglegend.

You can make your wardrobe #awesome with the Superhero Hashtag T-Shirts from Jack of All Trades Clothing. The Captain America #LivingLegend T-Shirt, the Batman #AllKnighter T-Shirt, and the Superman #Truth T-Shirt are each available for $25.

If you like The Family Guy and you like superheroes, feast your eyes on these cool mash-ups: Family Guy Superhero T-Shirts. There is a wide variety of designs featuring Peter Griffin as Superman, Lois as Wonder Woman, Brian as Batman, Stewie as Robin, and Chris […]