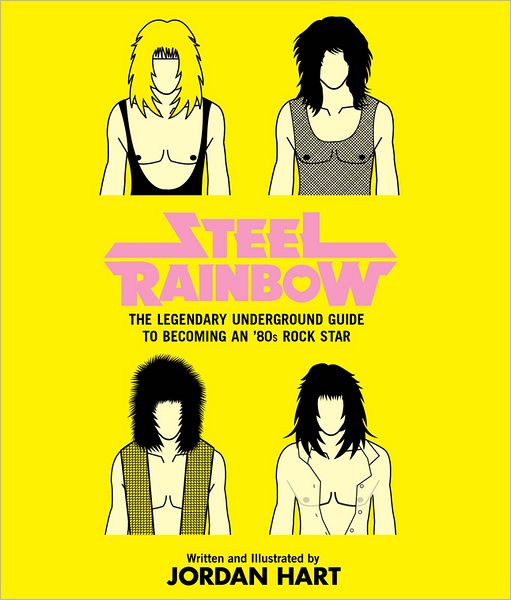 If given a second chance, a lot of us would choose the path of rockstardom instead of our current, non-glamorous cerebral professions that pay the bills now. The rock stars of the 1980’s had it all; fame, fortune, fun, and fabulous hair. Trends like the glam rock tend to return as retro. Since there’s a healthy chance that Hair Metal could be born again, let’s get a head start by studying this book that’s freshly new to bookstore shelves. It’s called Steel Rainbow: The Legendary Underground Guide to Becoming an ’80s Rock Star.

Nearly coinciding with the debut of the film “Rock of Ages,” “Steel Rainbow” is ready to grace your glass-top coffee tables. Perhaps it’s the perfect time to reawaken the rock stars we have buried deep within. We’ve already abandoned the dream of forming a profitable band, got rid of the Aqua Net, stopped wearing the tattered Metallica t-shirts, and graduated from college so that we could land decent jobs. But are we any happier?

Read “Steel Rainbow” and find out if you’ve got what it takes to time warp back to Paradise City, where the grass is green and the girls are pretty. Written by the creator of 10percentnerd.com, Jordan Hart’s “Steel Rainbow” can be found in paperback version for the bargain price of $10.15 at Amazon and at Barnes and Noble. “Steel Rainbow” has been endorsed by best-selling author Daniel Wallace who wrote “Star Wars The Jedi Path: A Manual for Students of the Force.”

Remember that big cell phone that brothers Steve and Doug were using in “Night at the Roxbury?” They were brothers? Noooo. Yeeees. Steroidal mobiles were the butt of jokes even back in the late 90s and now, they’re even funnier. Flash back to the 80s and don’t act like one of […]

The 80s brought movies, television shows, and cartoons loaded with women who kick butt, and the SuperWomen of 80s ‘Fight The Power’ T-Shirt lets you hang out with some of the most iconic ones. This black, 100% cotton tee, with artwork from Captain Ribman, features […]