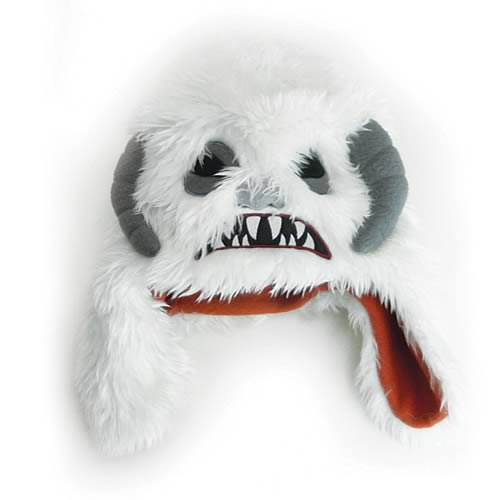 When the weather gets cold, the cold put a Wampa on their head. This Star Wars Wampa Laplander Hat may be the coolest laplander hat yet.

Just imagine, in a snow storm, your friends will only see a Wampa head coming at them in the mist as you grunt and groan. And since they don’t have Jedi powers, they will run away weeping. Great joke. Of course they will be pretty mad though.

Even so, this awesome hat is just too cool not to wear. Others will get a kick out of recognizing it and will be jealous besides. It’s only $17.99 from Entertainment Earth. It beats crawling inside a Tauntaun for warmth.

UPDATE September 2012: You can now purchase the Star Wars Wampa Laplander Hat at Superherostuff.com for $29.99.

Winter will be here before too long and you have to prepare, otherwise you are going to be freezing. This Doctor Who TARDIS Laplander Hat will keep you warm and toasty while identifying you as a true Doctor Who fan. You’ll look great with a […]

Do you need a new rug in your game room or how about the bedroom?  The Star Wars Wampa Plush Throw Rug would be perfect.  Just like Luke Skywalker in The Empire Strikes Back you can take down the Wampa, but instead of wandering off […]

It’s not as if you can skin a Wookie and wear his head as a trophy. And anyway, that’s not cool. So if you really want to wear a Wookie head on top of your own dome, get this Star Wars Chewbacca Laplander Hat. It […]

After his little incident on Hoth, Luke probably has seen enough of the Wampa to last a lifetime. But for the rest of us, this Star Wars Plush Wampa Backpack is a must have…It is right up there with the Star Wars Wampa Plush Rug. […]

If you grew up watching cartoons in the mid-80s or like watching classic cartoons now, then you probably remember the Care Bears. Originally created by the American Greetings Corp. for use on greeting cards, these loveable bears made a big splash in the cartoon world […]

If you are caring for a mogwai, there are some rules that you need to follow. Don’t feed them after midnight. Don’t give them any water and no bright light. Otherwise you will have a Gremlin problem. Of course, if you want a Gremlin, just […]

Are you crazy about Spidey? Has he gone to your head? He is about to literally do just that with this neat Spider-Man Knit Laplander Hat. It may not completely seal your face and turn you into Spider-Man, but it is the next best thing. […]

Summer is ending and winter is coming! And with that, all the annoying little things you need to deal with to get through a wet and cold week of work. Shoveling, salting, shoveling again, and of course scraping that ice off your windshield. Well, this […]

Do you want to look like a Marvel hero? Well, we have you covered from the neck up. This Captain America Knit Laplander Hat will make you feel like a real American hero. Proudly display Captain America’s shield on your forehead while you keep your […]

Keep your head warm and your heart satisfied with this Batman DC Comics Face Mask Laplander Hat. With the 100% acrylic shell and 100% polyester lining, this hat will let you feel like Gotham’s greatest hero as you slide it on your head and over […]