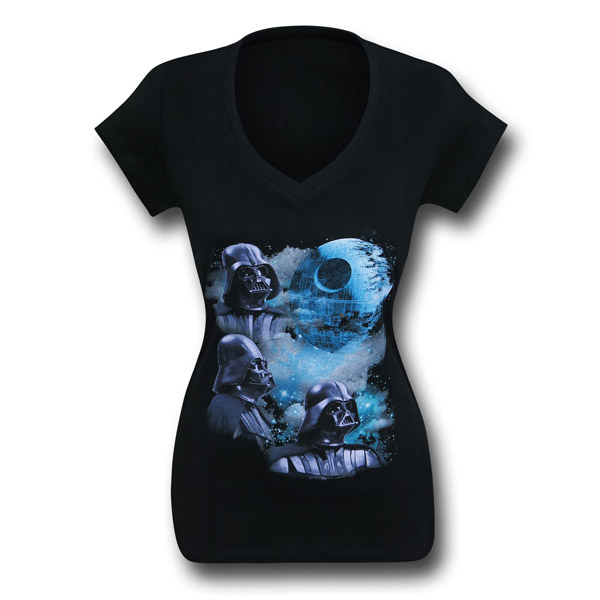 The power of the Dark Side gets tripled with the Star Wars Triple Vader Women’s V-Neck T-Shirt as a popular image gets a sci-fi twist.

It began with the Three Wolf Moon shirt, which has already seen parodies with Alan Tudyk, Grumpy Cat, and those rowdy boys from Supernatural. Now it’s Lord Vader’s turn, with three faces of the fallen Jedi gazing upon the moon. Wait! That’s no moon! That’s a not-quite-complete but fully-operational Death Star.

Last year’s Darth Vader and Son book was a huge hit, so a followup was natural.  It has now arrived in this new Star Wars: Vader’s Little Princess Book.  This hilarious book, by author Jeffrey Brown, depicts comics showing the funny struggles the Dark Lord […]

The Caped Crusader paints the Dark Knight on the Batman Triple Knight T-Shirt, giving us a variety of looks for Bruce Wayne’s masked alter-ego through the years. Scott Neilson Concepts gives a Bat-spin to a Norman Rockwell classic, with Batman using his reflection to paint […]

Harley Quinn gets in touch with her other selves through art with the Triple Harley Portrait T-Shirt. Batman did it. Joker did it. Now it’s time for the Clown Princess of Chaos to reveal alternate versions of herself as she attempts to capture the real […]